ART GETS BLOODY IN TERRIFIER 2 PIC

After dropping the first official photo from the hotly anticipated sequel, the official Facebook page for Damien Leone’s Terrifier 2 has shared a new shot of Art the Clown in all his bloody glory! 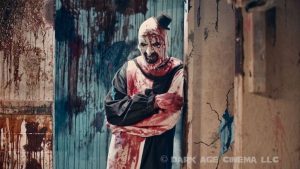 David H. Thornton returns as the murderous clown in the sequel, which also stars Lauren LaVera (Iron Fist) and Felissa Rose (Sleepaway Camp). The film will see Art resurrected by a sinister entity before returning to Miles County, where he must hunt down and destroy a teenage girl and her brother on Halloween.

We anticipate we’ll see a trailer soon, but for now, we’re excited to see that Terrifier 2 looks as bloody as the original!