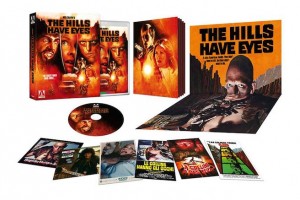 Arrow Video is always impressing with its range of brilliant Blu-ray re-releases. Up next, Arrow is releasing a Blu-ray of Wes Craven’s 1977 The Hills Have Eyes and it will include a special 4K edition. So, all those of you with your expensive 4K TVs can enjoy the gruesome, awesome The Hills Have Eyes in spectacular high definition.

Synopsis:
Taking a detour whilst on route to Los Angeles, the Carter family run into trouble when their campervan breaks down in the middle of the desert. Stranded, the family find themselves at the mercy of a group of monstrous cannibals lurking in the surrounding hills. With their lives under threat, the Carters are forced to fight back by any means necessary.

It’s going to be an unquestionably brilliant collection and you can pre-order it right here, ready for its release on 26th September 2016.