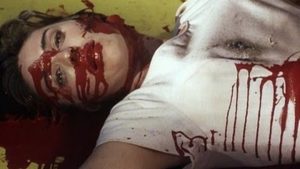 Herschell Gordon Lewis changed the face of horror in 1963, giving the world its very first gore movie (and arguably creating the slasher narrative blueprint) with his drive-in classic Blood Feast. The ‘Godfather of Gore’ then continued to push the boundaries both of onscreen carnage and good taste with films such as Two Thousand Maniacs!, The Wizard of Gore and 1972’s gleefully offensive The Gore Gore Girls.

With a fairly high-profile remake of Blood Feast on the brink of its world premiere at Frightfest this coming Saturday, the timing couldn’t be better for those beautiful folks at Arrow Video to release a 17-disc blu-ray boxset of the legendary director’s most notorious works. Entitled The Herschell Gordon Lewis Feast, the (as-yet) US-only limited edition retrospective contains 14 films, hours of extras and a 28-page book.

Yes, it retails for near-enough $230, but look at it; drink in its schlocky glory. This set contains some of the most important splatter films in the history of horror, as well as some of Lewis’ lesser-seen (and less blood-drenched) flicks, such as hillbilly hoot Moonshine Mountain and sci-fi sexploitationer How to Make a Doll. 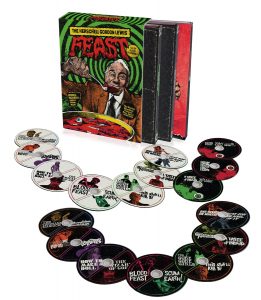 for the set’s full contents:
•    Fourteen of the Godfather of Gore s finest attractions, newly restored from original and best surviving vault materials: Blood Feast, Scum of the Earth, Two Thousand Maniacs!, Moonshine Mountain, Color Me Blood Red, Something Weird, The Gruesome Twosome, A Taste of Blood, She-Devils on Wheels, Just for the Hell of It, How to Make a Doll, The Wizard of Gore, The Gore Gore Girls, This Stuff ll Kill Ya!

•    Brand new introductions to the films by Lewis

•    Hours of extras including newly-produced interviews and featurettes, commentaries, short films and much more

•    Additional 2 bonus Blu-rays featuring 1.33:1 versions of Blood Feast, Scum of the Earth, Color Me Blood Red, A Taste of Blood and The Wizard of Gore [limited editions exclusive]