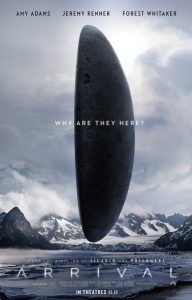 Synopsis:
When alien vessels land around the world, a linguist is hired by the military to aid in communicating with the life forms and, most importantly, discover why they are on earth.

Arrival is phenomenal. It is one of the greatest science-fiction films of all time, one that can sit proudly among the greatest; 2001: A Space Odyssey, Close Encounters of the Third Kind and Blade Runner and say, “I have earned this.” I was flawed by its grace and spectacle, how it managed to be equally as breath-taking as it was sombre; raising questions about the past and present, survival, war, humanity and time, but all the while being held together by an emotional strand so careful and intricately woven, it should be impossible. A film that is ultimately about trying to teach aliens English should not be this gripping. It should not have struck me this hard, but here I am, unable to stop thinking about the wonderful experience I had watching the events unravel in Arrival.

This is the perfect example of an intelligent and emotionally-driven sci-fi that manages to open the doors to huge ideas, knowing that it will explore these ideas confidently and intricately, genuinely leavings its audience astounded, entertained and, beyond all, moved. Arrival has the unique ability to stagger with the ideas that are tied into its storyline. Physics, mathematics and language are grabbed by the throats, and moulded into a unique theory to use in a thought-provoking, intelligent feature that is disguised an alien invasion narrative. If we remove the aliens that have landed, we are still left with a gripping story about a woman’s fight against a male-dominated military, a lesson in the importance of patience and attention to detail, a shockingly relevant comment on war and the actions of humans when under pressure. It’s also a thought-provoking exploration of survival and the desperation of humanity when it is greeted by something it cannot understand. 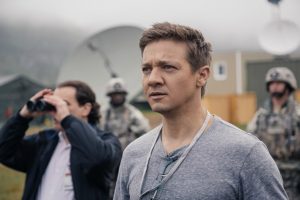 The thematical depth of Arrival where it fuses emotions and science in one inseparable entity is something that Christopher Nolan dreamed with his epic Interstellar. Don’t get me wrong, Interstellar was fantastic, but its overall sense of melodrama and desperation to tug at your heart strings was not always enjoyable. Don’t get me started on that over-explained ending and the bookcase. Denis Villeneuve manages to craft a tightly-woven, smart and complex feature with enough heart to fill a football field in a mere 116 minutes. Interstellar was 169 minutes and was less successful. Villeneuve proves that less is more and with his feature, he doesn’t need to spell out the ending to his audience. He chooses to allow the visuals to speak for themselves and trusts that we will be able to decipher the awe-inspiring revelatory puzzle on our own. Of course some explanation is needed; we’re not bloody psychic, but the subtle deliverance of the film’s ending and what it means is wonderfully refreshing.

Arrival accompanies the interior depth of its story with stunning cinematography and visual effects that add further beauty to the already gorgeous film. Villeneuve crafts an altogether strange, unsettling and elegant piece of sci-fi film-making that will dazzle and amaze with its depiction of a world that may be at threat from alien lifeforms. The scale and impact of the alien’s landing is captured minimally through news footage, rather than throwing the audience on the front line with various story arcs scattered around the world. The importance here is on two people and the effect this worldwide invasion is having on them and them alone. The intricacy of this central story increases Arrival’s concern with minor details; how Dr Louise Banks (Amy Adams) Ian Donnelly (Jeremy Renner) cope with their new responsibilities that can impact the world. In their roles, both Adams and Renner soar as they portray perfect mirror images of one another; they have similar ideas but come from different backgrounds, making them the perfect pair to solve earth’s other-worldly issue. Arrival does not showcase worldwide destruction in a typical sense and is certainly nothing like Independence Day. Arrival’s intensity lies in its ability to heighten intrigue and suspense through a simple shot on a character’s face and the overall slow, steady unveiling of what Louise and Ian discover. 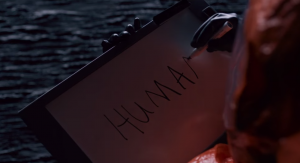 Arrival is crucial film-watching for those that desire to behold the best that science-fiction can offer as it is a unique, remarkable and vigorously entertaining blend of emotion and intelligence. Proving that Denis Villeneuve is currently one of the greatest film-makers of our time, Arrival is truly spectacular.