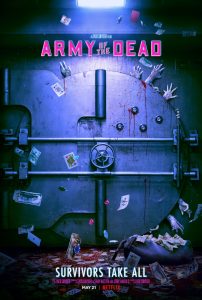 Zack Snyder (Dawn of the Dead) returns to the horror genre with Army of the Dead—and the first teaser trailer takes a big bite out of Sin City!

In addition to directing, Snyder came up with the story for Army of the Dead and wrote the screenplay alongside Shay Hatten (John Wick: Chapter 3) and Joby Harold (Awake). Netflix is releasing the film on May 21st, with a live-action prequel and animated prequel series to follow.

Ready to venture into the quarantine zone? Put it all on red and check out the new trailer below!