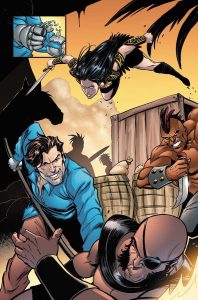 At first glance, Evil Dead and Xena: Warrior Princess might not have much in common, but both having been created by Sam Raimi and Rob Tapert, the franchises share a lot of the same influences, as well as both utilising a signature tongue-in-cheek sense of humour. With Lucy Lawless having a featured role in the fantastic Ash vs. the Evil Dead, now is the perfect time to unite the characters once again, showing that both franchises still have a lot of life in them yet – especially when willing to take risks and try new things.

In issue #1, the story begins with Xena and Gabrielle being defeated by an army of deadites. With no explanation as to how the pair ended up in such a predicament, they summon Ash with a torn page of the Necronomicon, but, true to form, Ash ends up in the wrong time, coming back to Ancient Greece at some point before the deadites attack.

Scott Lobdell’s dialogue is excellent throughout the comic, especially when it comes to Ash and Xena’s conversations. While Ash is characteristically flirty with the Warrior Princess, Xena is characteristically bemused, culminating in the pair literally comparing sword sizes at one point. The irreverent, risqué humour of both franchises is evident from the beginning, and the competitive banter between the protagonists is one of the many highlights of the comic. It’s clear that Lobdell is more familiar with Evil Dead than he is with Xena (I’m not convinced she would ever seriously refer to Gabrielle as “my sunshine, my light”) but the humour of issue #1 more than makes up for these small quibbles. 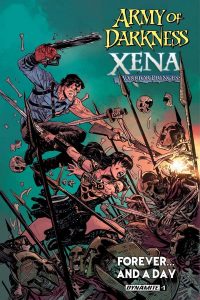 Artist Elliot Fernandez is an inspired choice for the crossover, whose cartoonish style really brings Lobdell’s scenes to life. The characters all closely resemble the actors who play them, particularly Ash, whose range of facial expressions emphasises the inherent humour of the writing. Colourist Pete Pantiaz is another great choice for the comic, inexplicably adding a certain depth to his otherwise bright and animated colour choices. The scene where Xena and Gabrielle face the deadite horde, for example, is beautifully done, with smoky yellows, reds and blacks effectively showing the devastation of the battlefield.

Although Xena and Army of Darkness crossovers have been hit or miss for me in the past, Scott Lobdell’s writing is so fresh, fast-paced and funny that it’s hard not to be enamoured by it. The whole book exudes a certain heart-warming charm, proving that – unlike the deadites – these characters fully deserve to be resurrected again and again.