Area 51 for the Paranormal; New Trailer for Hunt for the Skinwalker 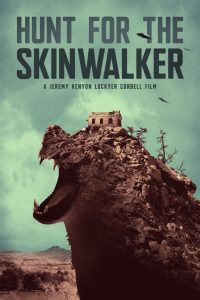 A mysterious trailer has been revealed for Hunt for the Skinwalker; a documentary that looks at the study of a well-known UFO and paranormal hotspot. It looks as bizarre as it sounds and if you’re not a believer or a lover of conspiracy theories, then you’re not going to be impressed.

The film is based on the book by George Knapp and Dr. Colm Helleher and the trailer teases the interviews and stories with those that have had supposedly unexplainable experiences at the Skinwalker Ranch in Utah.

I like to believe in Area 51, the Bermuda triangle and strange crop circles created by aliens, so I’m extremely intrigued by this odd documentary. Check out the trailer below and make up your mind: is the Skinwalker Ranch really home to the paranormal or are people just seeing what they want to see?

You can catch Hunt for the Skinwalker on 11th September and you can pre-order it now via Vimeo.