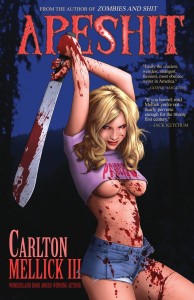 What the fuck can I say about Apeshit, well pretty often, almost as easy as the flip of a coin, the story went from flat-out batshit crazy to head shaking incredulous wonder.

We have six college kids taking off for a break to a country retreat, one of the kids grandfather has died and left him the cabin. So that’s where they are heading. There’s plenty of weirdness in this story, on the way up the perilous mountain road to the cabin they run past an area full of dead animals and a random dead bloke at the side of the road. The animal apocalypse it seems but that’s pretty tame as expectations should go.

Now these aren’t your average college kids, one’s a tattooed cheerleader sporting a mohican who happens to be in a relationship with two of the guys. She spends the majority of the book running round with her intestines hanging out, performing the odd lasso trick. There’s a couple who don’t have sex and it might be said, get up to some pretty funny sexual activities. That’s not funny haha, that’s fucked up funny. One guy has had an alleged urinary tract infection for a number of months that’s prevented him taking part in the shagging Olympics going down but oh! fucking no, stupid boy, he’s had an altogether different operation that… yeah you’d have to read it.

They arrive at the cabin and its total madness, total fucked up mayhem and yes the review does completely deserve this many expletives, there’s mutants and a heap load of freakish, rifuckingdiculously queer and downright outlandish shit going on.

Did I enjoy it? I don’t think I’ll ever be able to answer that, it felt weird and it’s written with an extremely simplistic writing style. This author is as nutty as a dive bomb into a swimming pool full of peanuts and he certainly entertains but I’ll be forever torn between genius and padded cell.