Synopsis:
A stoner living in a mobile home on the outskirts of nowhere wakes up after a blackout bender to discover something seemingly growing inside her womb.  Trouble is, she swears she hasn’t had sex in nearly a year… 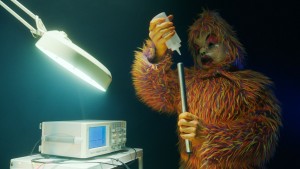 There are films which are better when you’re high, and then there are films which are so trippy already that you’ll want to watch only while stone-cold sober. Antibirth most definitely falls into the latter camp, an unhinged fever dream of body horror and off-kilter comedy written and directed by Danny Perez, making his feature debut.

Orange is the New Black’s Natasha Lyonne stars as Lou, a grumpy stoner living out of her late father’s beaten up old trailer in a desolate town in Michigan, partying hard and working the occasional shift as a housekeeper at a sleazy motel when she needs the money. After a particularly wild night she barely remembers, Lou begins experiencing pregnancy-like symptoms – nausea, bloating, enlarged breasts, bleeding nipples, teeth falling out, huge pus-filled blisters… All the normal things you’d expect when expecting. Her friend Sadie (Chloë Sevigny, American Psycho) suggests she should probably get herself checked out, and doesn’t believe Lou’s claim that she hasn’t been sexually active for months.

More sympathetic to Lou’s predicament is the mysterious and paranoid Lorna (Meg Tilly), the traumatised victim of a potentially alien encounter herself, who warns Lou of the involvement of shady government types who want to destroy want they don’t understand. It quickly becomes clear that something inhuman is hijacking Lou’s less-than-hospitable womb, and the miracle of birth quickly becomes more of a nightmare.

Antibirth is body horror done right, with plenty of good face-splattering gore and a lot of practical effects. In particular, there’s a truly disgusting blister-popping scene which will have you squirming in your seat. Mixing the paranoia of conspiracy theories with the unreliability of its drug-addled protagonist’s patchy memories, Perez goes out of his way to make the film weird and unbalanced, with sporadic bursts of slow motion and nightmarish garishly-coloured imagery thrown in to make you wonder what the hell you’re actually watching. At times, it feels as though even the film doesn’t know what’s going on, with Perez’s background in music videos and short films showing as he struggles to keep a coherent flow from scene to scene. The timeline is not always especially clear, with Lou’s belly suddenly swelling from a bloated bulge to an enormous, surreal pregnancy bump in what appears to be an overnight transition, but is actually several days.

If anything, perhaps Antibirth could have benefited from going bigger (pun intended). The whacked-out imagery is the highlight of the film, and a smattering more of it might have distracted from the shakier moments in its storytelling. Lyonne steals the show as Lou, pulling off a performance which is intensely lovable and funny even as her self-destructive character pops pills, snorts cocaine, and eats pizza out of the bin. Mark Webber (Green Room) is fantastic as Sadie’s lover Gabriel, a not so angelic drug dealer who offers cheap highs of dubious origin. Mentions of Gabriel’s former work with the marines feed nicely into the government conspiracy angle, while also hinting at a broader subtext regarding the mistreatment of military veterans which bubbles just beneath the surface throughout.

While far from perfect, Antibirth is a fun and nasty film from a hugely promising director, and the insanity of its final ten minutes more than make up for any misgivings you might have about it up until then. The squeamish might want to avoid, but fans of body horror will enjoy this bizarre Cronenberg-esque trip.