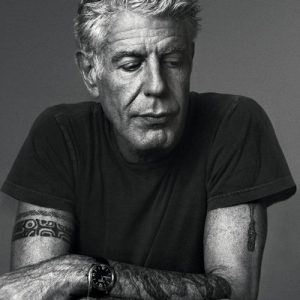 Anthony Bourdain is a man of many talents, from chef to traveler to stringing together a series of insults that would make a sailor blush, and he’s always eager to add more to his growing list. In 2015, he got to add the coveted title of comic book author with a Japanese inspired tale called Get Jiro!. Continuing on that trend, Dark Horse announced his latest comic title, Hungry Ghosts, a collection of horror stories each steeped in Japanese folklore and food. Planned to be released in late January, the art will be handled by a series of talented illustrators, each bringing their own spin on each story.

Dark Horse’s official press release states:
“Inspired by the Japanese Edo Period game Hyakumonogatari Kaidankai or 100 Candles, played by samurai warriors to test their courage, Hungry Ghosts reimagines this classic game of dread and terror as a circle of international chefs invoke modern tales of horror, terrifying yokai, yorei, and obake, all with the common thread of food—and pray that they survive the night. For the first course, with bad consequence, a ramen chef refuses to help a beggar, and a band of pirates gets more (and less) than they were bargaining for after their encounter with a drowning woman turns ghastly.” 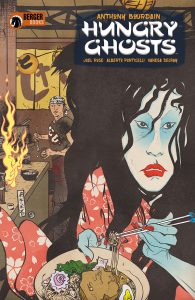 The series is planned to run for 4 issues and is one of four inaugural comics from Dark Horse’s newest imprint, Berger Books, named after the imprint editor Karen Berger. Berger is famously known for helping launch DC Comics mega-successful imprint Vertigo in the late 80’s and is credited for bringing in the wave of British writers that helped redefine comics in the early Modern Age. This will be Bourdain’s third comic credit, the second being a sequel to Get Jiro! titled Get Jiro: Blood and Sushi.

Look out for Hungry Ghosts Jan. 31!