Following a bout of health issues over the last few months, Vampire Chronicles author Anne Rice has confirmed that she is back to work on Blood Paradise, her sequel to Prince Lestat. Bouncing back with characteristic positivity and determination, Rice is also talking about her next book, as well as Universal’s much-talked-about Lestat film. 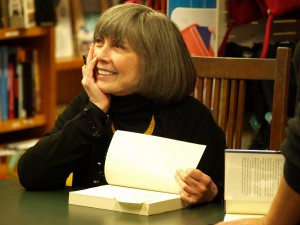 Early last week, Rice posted an update on her Facebook page in which she said: “Today was almost like a normal day, pounding out over 27 pages in this new Lestat novel, wanting to know what is going to happen next. I’m still under the weather, recovering from the battle with Shingles and Bells Palsy, but I’m coming back. Lestat’s talking to me, and as always when he starts talking, he won’t stop.”

Then at the end of the week came another post, in which Anne gets ahead of herself, mulling over what to write when the new Lestat book is done.

Following that rather beautiful sign-off, we will await further news. We at Scream wish Anne a speedy recovery. It’s great to know that the continued adventures of Lestat are on their way.