Anne Hathaway Controls a Monster in the Poster for Colossal

Nacho Vigalondo’s (Timecrimes) upcoming venture into the monster movie is one of our most anticipated films of the year. We’re struggling to decide whether it looks like utter perfection or a bit silly, but with Vigalondo at the helm we’re expecting to be blown away no matter what. 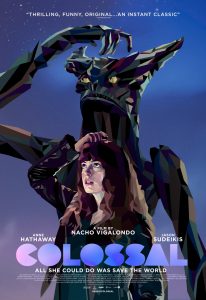 A new poster for Colossal has been released and it shows Anne Hathaway controlling a monster that is causing destruction in Seoul, South Korea. The poster is just as bizarre and wonderful as the film’s premise, showing the connection between Gloria (Hathaway) and the monster without explicitly describing it. It’s a striking and memorable poster that is one of the most unique we’ve seen for a while.

Synopsis:
Gloria is an ordinary woman who, after losing her job and being kicked out of her apartment by her boyfriend, is forced to leave her life in New York and move back to her hometown. When news reports surface that a giant creature is destroying Seoul, South Korea, Gloria gradually comes to the realization that she is somehow connected to this far-off phenomenon. As events begin to spin out of control, Gloria must determine why her seemingly insignificant existence has such a colossal effect on the fate of the world.

Colossal additionally stars Dan Stevens, Jason Sudeikis, Tim Blake Nelson and Austin Stowell. The film will be released on 7th April in the USA and 21st April in the UK.