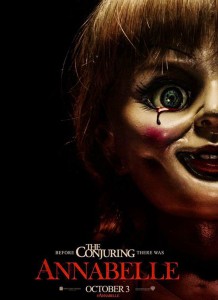 If this is anything to go by it would appear Hollywood has no ideas and is now building stories  around props from other films with this spin off centred around the 3ft doll from last year’s horror hit, ‘The Conjuring’.  Like the prologue from that film this sets out the doll as being  of evil intent mysteriously turning up in the places where it had not been left which leads me to believe that my car keys are also satanically possessed.

With this being an origin story it starts off with a loving husband giving the doll as a gift to his heavily pregnant wife. The first question is why, on being given such a freaky nightmarish looking doll, she didn’t say, ‘Oh how lovely..ur….. have you still got the receipt?’ But the story of a customer refund is not the most particularly horrific.  Early on much is made of TV reports regarding the Manson Murders hinting as to where this is heading and who would have thought it – their neighbours only end up getting killed by 2 members of a satanic cult before they have a go at offing the church going husband and pregnant wife culminating in the doll being possessed.  Possibly.

And that is part of the problem because though the doll is clearly intended to be the source of all manner of mayhem there’s also a demon present which takes focus away from the doll. That said it doesn’t there are some excellent scares which are credibly creepy but then it should be as this has been directed by John R Leonetti, the DoP on ‘Insidious 1 & 2’ and ‘The Conjuring’ itself and has learnt much from those films and their director James Wan. Though it would be easy to draw comparison with the Chucky franchise this reins back from showing the demonic doll moving of its own accord and is all the better for it with many shots achieving their maximum effect with the doll just sitting there staring out to camera. But again this is undermined by the doll’s appearance being so malevolent that no right minded would think, ‘Oh that would look great in my new born child’s nursery . I’ll just put it next to the set of kitchen knives, bottles of bleach and bare wires sticking out of the plug sockets ’. And there is the fall back on the usual horror  film tropes with an initial over dependence on electrical items that switch themselves which in turn are over emphasised with the use of big close ups none more so than a sewing machine as the new mother pushes material towards the jabbing needle to build a sense of unease.  But it really hits its stride after about half an hour with some superbly orchestrated sequences especially one in the basement of the flats they move into although one very good shock is completely ruined as it’s taken out of context when featured so heavily in the TV trailer.

With nods to early Polanski films as the new mother is left alone to be terrorised when her husband goes to work this is an effective piece of Halloween hokum with some excellent goosebump goading moments although with the makers eyes on a franchise the ending is left open for the inevitable sequel.