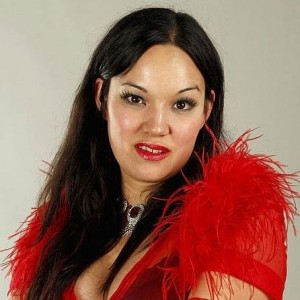 The emergence of a female filmmaker is always a topical talking point in the horror community. In a genre where films are primarily helmed by males, it’s always refreshing to see a strong female auteur lend her perspective to proceedings. That being said, good original movies are always welcome regardless of the gender of the filmmaker responsible, and The Love Witch is far from your conventional genre offering. Inspired by the Technicolor cinema of yesteryear perfected by the likes of Bava – along with the artier, unappreciated sexploitation films often dismissed as smut by those who can’t appreciate its deeper qualities – The Love Witch promises to be one of the most unique offerings in quite some time, and we couldn’t be more excited for it.

Recently, Scream Magazine had the opportunity to interview its writer and director Anna Biller about the film, her influences and the female identity within the genre as a whole. It’s an insightful piece and Biller possesses an intelligence and appreciation for cinema that should make this film appeal to those looking for something thought provoking and different to the usual fare. Enjoy.

SCREAM: First and foremost, for our readers who might not be aware of you, how did your relationship with horror films begin and when did you decide to pursue making your own?

My interest in making this particular horror movie was because I had the idea to make a movie about a witch, and that immediately evoked certain types of horror imagery for me in trying to create not only a proper scary atmosphere for that witch, but to create what might be inside the mind of a sociopath. I am a symbolic filmmaker, so I like to go into genre conventions when making films, since this is a language all cinema-goers know, and that can be used to powerful effect. I also like the way lurid colours can be used to create a sense of tension and horror, the way some of the Italian and British directors from the ‘60s used colours such as red and blue to evoke strong emotions. The Love Witch was heavily designed with a strong colour palette, and was shot on film and lit with strong white light to be reminiscent of those films.

SCREAM: What else can you tell us about your new film The Love Witch?

AB: I wanted to make a horror movie that is a reversal of the majority of horror films out there where the serial killer is a man who kills women (The Love Witch is a female serial killer who kills men not violently, but with too much love). I am interested in how being beautiful can drive women crazy, and how madness itself can be a horror-show. I also wanted to create a witch that is both horrifying and sympathetic – not just a figure of evil, but a psychologically realistic woman.

SCREAM: In your films, sexuality is used to empower the woman, which poses some interesting food for thought about gender and sexual politics in films – especially horror. Though there have been exceptions, for the most part, women’s sexuality in horror tends to be viewed through a male lens, which doesn’t always necessarily depict empowerment. As a whole, would you say that the genre misunderstands women, especially in regards to sex?

AB: I wouldn’t say that the genre misunderstands women as much as I would say that the men who make these films don’t take a woman’s experience or point of view into consideration. And why should they? No one really wants their entertainment peppered with politically correct notions about how to treat other people. On the whole the evidence suggests that men do not have fantasies about strong, empowered women, but rather they have fantasies about voyeuristically watching naked, beautiful, vulnerable, young women being punished for their beauty, sexuality, and unavailability by being raped, killed, and mutilated – or, whatever it is you actually see in most horror films. I’ve joked that the reason I don’t watch many slasher films is that I think women are much more interesting alive than dead, but obviously many viewers do not agree! I’ve noticed that sometimes men find it relaxing to watch movies where women are killed; inversely, there are some women who have seen The Love Witch who seem to find it relaxing that men are killed.

SCREAM: The Love Witch seems to make sex the weapon, as opposed to the act that gets punished. Do you think that sex, when wielded by a woman, is just as powerful as Jason with a machete?

AB: One reviewer did write that this was the case, and I think it’s an interesting metaphor. Sex has been used as a weapon against men since time immemorial. It’s only in the past couple of decades that we don’t see that anymore in movies. You see this again and again in noir films, pre-code films, and other classic dramas. But if women use sex as a weapon, it’s because men have historically always subjugated women, and held female sexual appeal as a woman’s biggest bartering tool. But in The Love Witch, while Elaine does indeed use sex as a weapon against men, her main weapon is actually love. Her victims can handle the sex she offers them; it’s the love they can’t handle. (That has been my experience in life too).

SCREAM: What is your history/relationship with witchcraft? Furthermore, how well do you feel it has been represented in cinema throughout the years?

AB: I have always been interested in witchcraft, but I only began studying it seriously in preparation for this film. I read dozens of books about witchcraft – both historical and present-day – as well as attending rituals and classes and speaking with witches I know, and I gained a pretty solid knowledge of the craft along the way. Because of this, The Love Witch might be the only film made in a very long time that treats witchcraft as a religion, a belief system, and a system of rituals and practices. Besides a few interesting examples made in the ‘60s and 70s, such as Rosemary’s Baby (1968), The Wicker Man, (1973) and Season of the Witch (1973), most films about witchcraft feel they have to add supernatural elements in order to make them scary. To me this is usually not scary, but merely silly. I do love these “realistic” films about witchcraft though, and those that use witchcraft (as I do) as a backdrop for talking about female sexual power, such as Bell, Book, and Candle (1958) and Day of Wrath (1943). 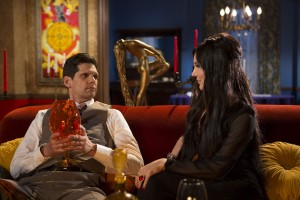 SCREAM: The film is very reminiscent of a bygone era. How has the response been so far?

AB: It’s been explosive. I think that people may finally be tired of the drab, bleached out, blue-tinted films they have been subjected to for a decade or more, and are ready to see some colour – some Technicolor! People also love the vintage cars and clothes, the sets, the makeup, and the hairdos, which exist even though the movie is set in the present day.

SCREAM: Do you have any future projects in the works you can tell us about?

AB: I am working on a script now about a sociopathic husband, inspired by movies such as Gaslight (1944) and Caught (1949), a sort of “Bluebeard” story in which a woman slowly discovers that the man she is living with is a monster.  I am always interested in putting female fantasy on the screen, and this is the type of story that has always fascinated me. So, it will be another horror movie, again from a female point of view, and again about problems of expression and control between the sexes.