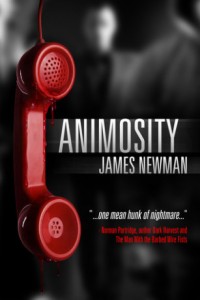 Animosity is one of those books that no matter your preferred genre, should definitely be read. An incredibly powerful story that will leave a lasting impression. James Newman proves he is a master storyteller with a tale that builds the tension in a slow, measured fashion, bordering on torture until an almost surreal explosion of hatred brings an incredulous finale.

There’s no fantastical elements, no ghosts or horror as such, just a gritty tale of realism, that you could envisage actually happening, that explores the depths and the evil that seemingly normal people, friends even, can reach when confronted with horrific events and an ideal target.

Andrew Holland is a bestselling author of horror novels, an occupation that never really sat well with his neighbours but he was the streets celebrity and treated as such. While out walking his dog he discovers the body of a child and is shaken to his very core. Not considered a suspect, at least by the Police anyway, his life is put under the proverbial microscope by the press, his every mistake laid bare and as his neighbours turn against him, his comfortable life is about to become anything but.

“I have experienced real horror. I have known true evil. Its name is human nature.”

Anger, hatred, fury, outrage, resentment, all these feelings fester in the minds of his friends and neighbours, until things start to happen, little things at first but when it starts, there’s no going back.

“The only rigidity lies in our will, our conviction that we are on the right road and that our initiatives are most pressing. ”

This is normality gone crazy and its way more frightening and thought provoking than the majority of horror out there at the moment, the animosity hidden behind a wry smile, a barbed comment, something you can easily dismiss until it takes the next step.