The Anguished Man will Haunt the Screen in Terrifying True Story 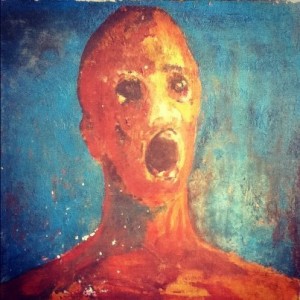 Said to be one of the world’s most haunted items, The Anguished Man was acquired by Brit Sean Robinson from his Grandmother, who had kept it stored in her attic for some 25 years. Though the artist’s name is unknown, Sean’s Grandmother had told him stories that the painter had used his own blood in the painting, before committing suicide. She was convinced the painting was evil, having seen many times a dark figure in the house, and citing the piece as the source of strange noises, most often the sound of a man crying. Initially sceptical, Sean and his wife soon started to see the same black figure in their house. “We have heard crying coming from the corner of our bedroom. We started seeing the dark figure standing at the bottom of the bed, just apparently staring at us,” Robinson has stated. The owner of the painting to this day, Robinson is attached as associate producer on Anguished.

“I am thrilled to be able to bring the story of The Anguished Man on the screen,” writer/director Ricks says. “There is something really intriguing about haunted items and especially haunted paintings – they really appeal to our biggest fears and imagination”. 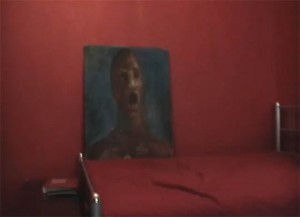 When the film is released, the filmmakers plan to let audiences the world over see the real-life painting live. “I wouldn’t recommend touching the painting,” warns Robinson, “but it would be great to take the painting with me to conventions and paranormal events, to meet people and to let people feel the paintings weird energy.”

Anguished will be haunting screens sometime in 2017.