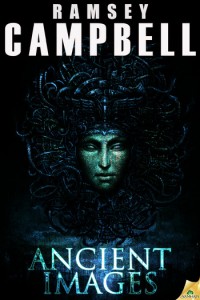 The set up for this book is excellent – a long-lost horror movie starring Bela Lugosi and Boris Karloff surfaces only to be censored by people and forces desperate for it to remain forgotten. Why? And to what lengths will they go to keep it quiet? A mysterious death befalls the finder of the movie reel, and it’s left to his close friend to continue the crusade in his memory. Throughout the book there is a tremendous sense of foreboding, of shadows watching just out of sight. The tension is palpable as the plot moves along. It’s a slow burn but an enjoyable one. The atmosphere is really the highlight of the book. Our intrepid crusader, Sandy, travels around England following different leads, interviewing people involved in the film, piecing together where the stolen movie could be. The people she meets are interesting. Conversations with these characters about the movie and their usually hostile reactions to it are the most fascinating interactions in the book. I really liked the idea of the missing movie reel. While tracking the movie our heroine travels to the town of Redfield, which has more than its fair share of Wicker Man-esque, ‘we don’t like strangers ’round here‘ pagan villager types. The main characters are likeable enough, but the relationship between Sandy and her new-found writer boyfriend doesn’t really come off. He is the one character who comes across as bland. The forces opposing the surfacing of the film reel are a mixture of powerful old aristocracy, corporate wealth and a supernatural agent.

The tension of the plot builds as Sandy gets closer to finding out what’s on the film reel that everyone is so desperate to repress. Unfortunately, the almighty climax that I was expecting didn’t really materialize. The final conflict was minor. The main antagonist died rather boringly and not at the hand of the heroine. The supernatural never really had the impact I felt it should have and questions were left unanswered. The book ended too soon, failing to provide a satisfying resolution. For me, some of the surprise at the abruptness of the climax and the subsequent ending came from the fact that I was reading the eBook and the page numbers assured me I still had 70 pages to go. Unfortunately, those 70 pages were  author notes and an excerpt from The Seven Days of Cain. Don’t you hate it when they do that? The book is low on deaths, low on scares and low on gore, but high on tension and atmosphere.

Overall, it’s not a bad book. I just have the sense that after such a gripping build up it could have been so much more.