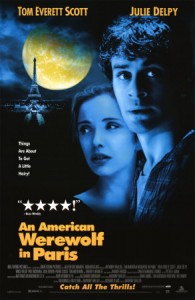 Synopsis:
While holidaying with friends in Paris, American tourist Andy McDermott (Tom Everett Scott) saves a mysterious young Parisian, Serafine Pigot (Julie Delpy), from plummeting to her death. After a period of hospitalisation, Andy sets out to track down Serafine but is suddenly savaged by a “wild dog” then visited by the ghosts of its most recent victims. The spectres inform Andy that he will soon turn into a werewolf, but to undo the curse he can take his own life or eat out the heart of the creature that bit him.

We all know the majority of horror remakes and sequels are soullessly fashioned to capitalise on our love for, and success of, their predecessors. Even though, in most cases, they deliver nothing new or interesting in terms of concept, character and storyline, we watch them anyway in hope that the film-makers have somehow managed to recapture the essence of the original. There are some worthy descendants (Evil Dead 2, Dawn of the Dead, REC 2, Let Me In) and at times a few even manage to improve on their predecessors. But this is definitely not the case with An American Werewolf in Paris.

Those who missed the sequel to John Landis’ 1981 masterpiece on its original 1997 release and are keen to check it out, should approach with extreme caution and the lowest expectations or, better still, just it avoid altogether. For those braver/ masochistic few who have already sampled its delights and are thinking of having another go, beware: it’s worse than you remember. Time has not been kind to An American Werewolf in Paris. With shaky CGI being the most glaring of its faults, werewolves jitter in fractured, scrawny pixels, like video-game prototypes scrawled by a drunk child on a broken etch-a-sketch pad. But bad effects can be forgiven if more vital components are in place. Unfortunately, AWIP soils nearly all of its fundamental facets. 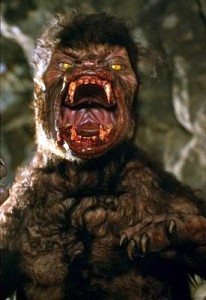 Julie Delpy is decent, conveying efficient inner turmoil as the psychologically fractured Serafine, but the rest of the cast are galling. Disfiguring their depthless genre archetypes like a swiftly manifesting illness. Everett Scott zombies as Andy with a schmaltzy swagger and shit eating grin, while his buddies Chris (Phil Buckman) and Brad (Vince Vieluf) jerk around as vacuous jock douche frat sacks, adhering to the meat-head model utilised to be mutilated in most horror franchises. Inane and grating college comedy is carelessly dispersed with total disregard to what meagre scares the film struggles to muster, but the comedy is more terrifying. One nauseating moment involves Andy accidentally dropping a condom in a restaurant while out on a date then pretending it’s chewing gum and casually eating it. It’s a scene that wouldn’t seem out of place in a Porky’s sequel but not in the follow-up to one of the greatest horror films ever made.

The original American Werewolf was a faultlessly self-contained genre fusion that never called for a continuation. Landis delivered sharp scares and humour that was so dry, it was almost like he attempted to make a straight horror but his natural comedic demeanour percolated the scares but without sabotaging them or jimmying in bad jokes like the follow-up does. Anthony Waller’s “sequel” clenches to the original’s innovations, desperate for the association.  A dream within a dream scene happens again while apparitions of the recently mauled return to give warning to our cursed protagonist. Andy wakes up naked in a strange location after a killing spree like David does in the original, and even the wolf and corpse designs seem directly lifted from AWIL (gashes down the cheeks and an annihilated neck wounds).

If a sequel to An American Werewolf in London was so compulsory, it probably would have been better if produced closer to the time, to capitalise on the style and era in which the first one was set. London 1981 was such a prominent ingredient in the original movie and as much of a vital character as David, Jack, the wolf or Alex. AWIP doesn’t feel like a sequel in the sense that it’s related to AWIL. None of the original characters return and there are no references to the incidents that occurred. AWIP’s opulent and urban chic Paris of werewolves, night-clubs and bungled police investigations is clustered via a calamitous blitzkrieg of action set-pieces and gangrenous CG beasties, combined with the sound of some skull-raking skater anthems (a far cry from the glorious blues/ rock of Bobby Vinton, Van Morrison and Credence Clearwater Revival). AWIP is a kludgy, toxic and aggravating cash-in that is more of a supplement to, or a malign growth on, it’s far superior predecessor.

Extras:
Generic stills gallery, cast filmography and a trailer that’s not much better than the film.