Thirty-seven years after the film that started the franchise was released, the Amityville cash cow is still being milked beyond capacity. At the time of writing, three have already been released this year, with another set to be unleashed in 2017. If horror franchises have taught us anything it’s that their quality tends to decrease the longer they go on, therefore it’s understandable if one is cynical towards the notion of another Amityville instalment. This particular series has especially been prone to the occasional nosedive headfirst into the toilet bowel, and the Amityville Terror isn’t going to resurrect it anytime soon.

As the title of the film would suggest, Amityville Terror is as generic as they come when it comes to the haunted house subgenre. The story centres on a family who move into a new home only for weird stuff to start happening, as the demonic spirits that reside in the house don’t take too kindly to house guests. So, in order to punish them, they decide to exact ever cliché in the book for movies of this ilk. Furthermore, the film throws in the addition of evil townspeople who must ensure that the new residents stay in the house – and if you’ve seen Ted Geoghegan’s brilliant We Are Still Here, this premise will sound familiar to you. 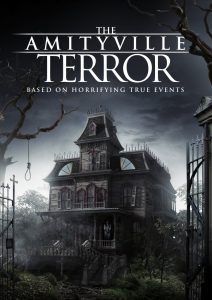 The performances are all hokey at best, which doesn’t really matter as the characters are all forgettable caricatures. The special effects look cheap even by the standards of a straight-to-DVD movie, and not in the charming way either. The direction is flat and uninspired, but it is competent for the most part. In all fairness, it’s no worse than the majority of sequels churned out on a shoestring budget to capitalise on the name value of a popular property. Films with lower budgets have done much more with less, but most of the criticisms you can lobby at Amityville Terror are evidently the result of budget financial constraints. In that sense, its misdemeanours are understandable.

That being said, the film isn’t entirely without merits. Despite not being anything to write home about in terms of originality or excitement, it’s not a complete waste of time. I didn’t want my time back after watching it, but it’s not going to be an 84 minutes of my life I’ll remember in the long run either. Amityville Terror is the epitome of generic and forgettable and I’d only recommend it to diehard fans of the franchise.