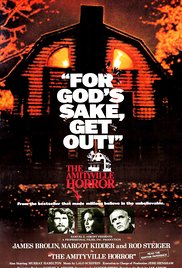 Synopsis:
Newlyweds George and Kathy Lutz (James Brolin and Margot Kidder) purchase a cut-price house on the south shore of Long Island. After moving in with their children, the family soon find themselves haunted and under attack from malevolent spirits which want to kill and possess them.

While UK horror fans wait with baited breath for the much delayed release of Amityville: The Awakening, the blu-ray debut of Stuart Rosenberg’s seminal haunted house “classic” from 1979 will whet appetites with its restrained scares, fashioned by less artificial methods than modern CG efforts. From the opening credits, an air of unease is immediately established by legendary composer Lalo Schifrin’s deeply unsettling score (nursery rhyme-like music hauntingly hummed by a child choir). Meanwhile, a dark red sky behind the house’s silhouette steadily bleeds into stark black and white, setting the tone for the unfathomable creepy, creaky floorboard horror to follow. 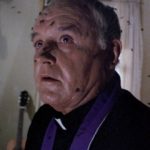 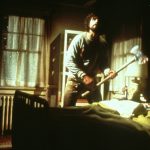 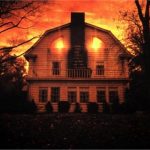 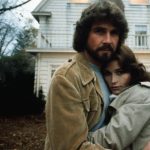 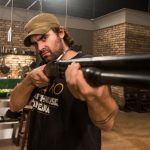 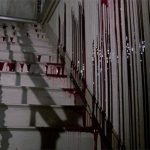 Shots, screams and stills of kill scenes are chillingly integrated into the set up which sees George and Kathy escorted around the property by an estate agent before being presented with the “too good to be true” purchase offer of $80,000 (the property recently sold in reality for $850,000 albeit forty years later). The Lutz’s are privy to their house’s macabre history (a mass homicide which formed the basis for 1982’s prequel Amityville: The Possession) but snap it up nonetheless as “houses don’t have memories”. But unhinged supernatural forces soon surface to slam doors, scare the clergy and rouse all manner of paranormal mayhem.

A local priest named Father Delaney (Rod Steiger) is sent scurrying back to his chapel by a cloud of discordant blue bottles. Stepfather/husband George slips into a fugue state (via a series of check shirts that would turn George Lucas yellow) and grows gradually more pasty faced/pink eyed as the plot progresses, before budding into an axe happy nut-bag. Meanwhile the spirits/house conspire to irk Kathy and co by dripping blood, stealing cash and shattering a kid’s fingers by slamming them in a window. Commendably, not a single spectre is seen throughout The Amityville Horror’s duration. These ghosts may be malicious but at least they have the common decency not to reveal themselves in public. Their presence is teased by demonic red eyes, growling animals and out of sync reflections but no spirit is spotted on screen, allowing the real horror to simmer in the viewer’s imagination, where it operates best.

Haunted house films/stories of the era weren’t typically hindered by rigorous script structures, slammed in set-pieces or obligated to be snazzy/particularly sleek. Horror film-makers were simply trying to tell a story and scare viewers’ socks off. The Amityville Horror’s low-fi aura adorns unease using eloquently woven suspense and scares which slither under the skin instead of jolting viewers from their seats via perfunctorily strategised jump frights. The terror is augmented further by superb diegetic and non-diegetic sound design by Stephen Hunter Fick. Not the amped up orchestral stabs unimaginatively thwacked in to do the job a director can’t hack. Although one Bernard Herrmann rift rip raises more of a smirk than arm hairs.

The story trundles unevenly in the second half due to its flitting between scenes which were probably based on occurrences from the “real life haunting” and awkwardly incorporated to make the film more authentic (but not necessarily better). Meanwhile the presence of an imaginary friend, maddening father figure and house built on burial ground back-story makes TAH often resound like a test-run for The Shining. Echoes of The Exorcist also reverberate during moments with Father Delaney and his young protégée Father Bolen (John Stroud). There is a psychic spiritual synergy between other characters exposed to the evil in the house’s basement. According to the Lutz’s free-thinking friends, who seem like the inspiration for the couple played by Lisa Marie and Larry Fessenden in We Are Still Here, the property is a gateway to hell. While imaginary friends and chairs that rock alone are classic horror components they aren’t unique enough to warrant a spin-off movie like The Conjuring’s Annabelle and The Nun managed. The only nun in TAH is spotted amusingly playing basketball in the backdrop of one scene and later vomiting atrociously out of a car in another.

Despite it’s flaws, The Amityville Horror has become highly regarded with age due to its festering tension and disciplined scares which make it stand out in a sub-genre inundated with synthetic CG spectres. While arguably not as polished as either of The Conjuring movies (exceptions to the rule), The Amityville Horror has an air of something superior due to the inherent naturalism of its craft and design and lack of tacky monsters, gaudy effects or pop cultural references incorporated to target teen viewers. These commonly date or (if lucky) lend a kitsch/retro air which makes a film synonymous with, or a product of, its time. With the exception of James Brolin’s crash helmet beard/hair one-piece, The Amityville Horror is free from era defining, terror hindering tropes. It remains a timeless, hugely enjoyable haunted house horror with disquieting suspense and timeless frights, despite that latter half bobble due to its shaky storyline.
Extras include: feature-length documentary “My Amityville Horror” which features the real-life Daniel Lutz recalling his childhood spent in the house and the frightening incidents which formed the basis of The Amityville Horror. Lutz seems shaky and unsure, suggesting his “memories” are far from reliable. While limited in scope/production prowess/ to interview footage, My Amityville Horror is insightful and intriguing, especially when Lutz is cross examined by parapsychologists and psychotherapists. While interviewed journalists who visited the property at the time, claimed to have seen no evidence of any supernatural activity. 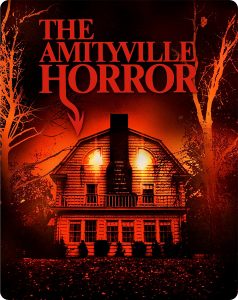 Other special features include an intro/running commentary with parapsychologist Hans Holzer, “Brolin Thunder” featuring James Brolin discussing his career and role in TAH. “Child’s Play” sees childhood actor Meeno Peluce, who played son Matt, recalling memories from the set. “Amityville Scribe” features screenwriter Sandor Stern discussing his days in medical school and how, from there, he went into TV and film writing. Lalo Schifrin recalls his early life in a jazz band in “The Devil in the Music” and “For God’s Sake Get Out!” features archive interviews with Margot Kidder and James Brolin who reminisce fondly on the production, interlaced with clips from the film.