American Remake Of Martyrs Will Be Released By Anchor Bay 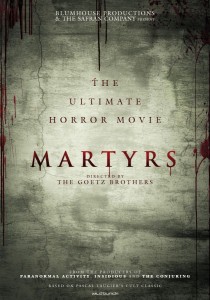 If you didn’t already know, one of the goriest and twisted yet brilliant French films, Martyrs, is getting an American make-over. It was recently announced that the new Martyrs remake had already been filmed and Anchor Bay have bagged the rights to the film and limited theatre showings.

Pascal Laugier’s disturbing psychological horror film was released in 2009 and focuses on many themes including religion, although the main objective was pain. The Goetz Brothers (Scenic Route) have directed the feature, from a screenplay described as “spellbinding” by previous director Daniel Stamm (The Last Exorcism). The screenplay was written by the Vacancy and The Hole’s Mark L. Smith.

Here’s the synopsis for the original Martyrs:
“In ‘Martyrs’ 10-year-old Lucie flees from the isolated warehouse where she has been held prisoner. Deeply traumatized, she is plagued by awful night terrors at the orphanage that takes her in. Her only comfort comes from Anna, a girl her own age. Nearly a decade later and still haunted by demons, Lucie finally tracks down the family that tortured her. As she and Anna move closer to the agonizing truth, they find themselves trapped in a nightmare – if they cannot escape, a martyr’s fate awaits them…”