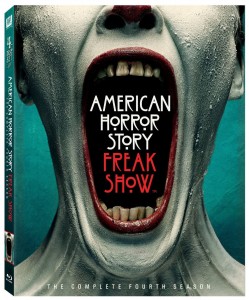 Hitting the shelves around the same time as the new series airs, is American Horror Story: Freak Show. The fourth season of the hit horror show was, awards-speaking, the most successful to date. With 19 Emmy award nominations, mainly for technical awards, the show proves that horror has a happy home on television.

For those wishing to delve further in to the Freak Show, you should be happy to hear that there is plenty for you to sink your teeth into. The extras are as follows:

Disc 4:
Magical Thinking
Freak Show: Show Stopper
Curtain Call
Getting Freaky: A Peek Inside the Tent
Two Heads Are Better Than One
Twisty: Behind the Mask of Terror
Freaklore: The Spectre of Edward Mordrake
American Horror Story: Freak Show Extra-Ordinary Artists
The Premiere

In a jam-packed 4-disc collection, American Horror Story: Freak Show will be released on Blu-ray and DVD on 6th October 2015.