As reported by Deadline, AMC – they of The Walking Dead and Preacher – will soon increase their genre output with a series based on David Cronenberg’s novel Consumed. 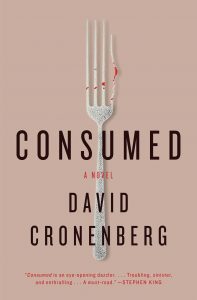 Cronenberg – the visionary genius behind the likes of Rabid, Videodrome, Scanners, The Fly, A History of Violence etc – will executive produce the series alongside Fear The Walking Dead showrunner Dave Erickson and Lucifer executive producer Sheri Elwood, who together will write the adaptation and take on showrunner duties. There is also talk of Cronenberg directing the pilot, if not the entire series.

Published in 2014, Cronenberg’s novel follows two journalists who set out to solve the cannibalistic murder of a controversial Parisian philosopher.