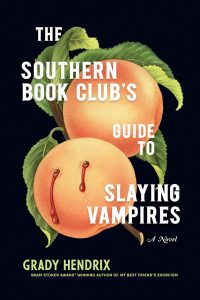 The Southern Book Club’s Guide to Slaying Vampires, the upcoming book from Grady Hendrix (My Best Friend’s Exorcism, We Sold Our Souls) hits shelves this spring, but PKM Productions has already snatched up the rights, with plans to adapt the book into a series for Amazon.

Set in the 1990s in the city of Charleston, South Carolina, the novel is a character-driven supernatural thriller revolving around a woman’s book club. When a handsome stranger appears in her suburban neighbourhood, frustrated housewife Patricia Campbell feels things she hasn’t felt in years. But as local children start going missing, the true crime-loving book club soon becomes concerned that the stranger isn’t what he seems…

We’ll bring you more details on the planned series as soon as we hear them. In the meantime… maybe keep some garlic handy, just in case.