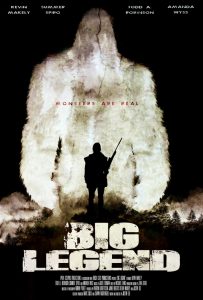 This rather cool poster has been unveiled for upcoming Bigfoot flick Big Legend, which has just revealed a cast that includes A Nightmare on Elm Street favourite Amanda Wyss.

Also starring in the film are Kevin Makely (TV’s The Cavanaughs), Summer Spiro (If Looks Could Kill) and Todd A. Robinson (All Hell Breaks Loose). It was written and directed by Justin Lee, and tells of a former soldier who goes in search of his missing fiancé but finds something far bigger, and far hairier.

Synopsis:
The film follows an ex-soldier named Tyler (Makely) who ventures out into the Pacific Northwest wilderness in hopes of finding answers to the disappearance of his fiance (Spiro). After a series of strange and violent occurrences, Tyler finds himself relying on a mysterious poacher (Robinson) who just might have the answers he is looking for.

Wyss plays Dr. Wheeler, although we will have to wait to find out what part her character plays in the story. Big Legend was shot in Washington state, and is currently in post-production.