Synopsis:
Two young women named Justine and Alucarda meet in a convent. They soon become intertwined with one another, and a world of Devil Worship and demonic possession.

Satan, Lucifer, Beelzebub, or whatever names you might call him. The devil is the ultimate adversary, he’s the perfect villain, and one we’ve always been fascinated by. He’s the perfect representation of the individual, drawing his line in the sand and defying all forms of authority. Throughout the centuries, his legend has grown astronomically. Ever since the early days of the silent era, he’s made more than one appearance on film. Coincidentally, he’s captivated and mystified theatre going audiences ever since.

Alucarda, released in 1978, fully embraces the mystique of the cloven-hoofed antihero, and satisfies the temptation and curiosity that comes with him. A film by late Mexican auteur Juan Lopez Moctezuma, it has a surprising amount of depth and detail. On the surface, one might just dismiss it as another entry in the ‘nun-sploitation’ subgenre, capitalizing on the success of Ken Russell’s The Devils. However, one has to look past what’s on the screen, and what lies beneath the imagery.

Monteczuma got his start working alongside Chilean director Alejandro Jodorowsky. He’s credited as producer on Fando Y Lis, as well as El Topo. This early experience is clearly noticeable, as this film possesses an almost Fellini-esque quality about it, in both its themes and presentation. 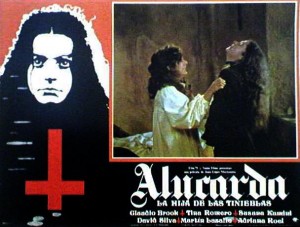 Utilizing two female leads, one of which is named Justine somewhat serves as homage to the Marquis De Sade novel of the same name. Much like De Sade’s story, Alucarda is a tale of virtue and vice, and the ongoing clash between them.

It’s the nature of their relationship that makes the narrative take on a whole new meaning. Early on, the two of them form a blood pact with one another, and later on one with the devil. It’s at this moment that their kinship takes on a sexual nature, one that leads them to betray their old faith, as they become possessed vessels of Satan. Soon afterwards, evil begins to unfold behind the walls of the convent in which they live.

More than just being a form of entertainment, this sets up one of the underlying themes of the film. It addresses a subject matter that Latin America or any other region with Catholic roots would consider taboo. This is a statement about breaking away from the modes of traditional thinking, and the complacency of being in a society with strict rules and morays. In her own way, Alucarda represents the outsider refusing to be placed in a subservient role.

Moctezuma’s attention to detail with her goes above and beyond in establishing that. Utilizing a technique from the old Technicolor days of Hollywood, Alucarda’s wardrobe stays the same throughout the film. This reinforces her as the main focus of the story, and implies that she has no arc, and retains a consistency throughout the duration. She’s our focal point, and in some ways, our protagonist. It also forces us to wonder if her invocation of the Devil was her plan from the beginning. Adrzej Zulawski would utilize this same technique in Possession with his female lead, and use a very similar choice of costume.

Commentary on Catholicism and sexual repression aside, we’re also introduced to much of what we’ve seen before in films regarding demonic possession. Although nothing groundbreaking, there’s still a good amount of violence, blood, mass hysteria, and the fight between the forces of good and evil. More importantly, we’re also introduced to the angle of science vs. religion. Much like the Blind Dead films of Ammando De Ossorio, we see superstition and skepticism feuding back and fourth between one another. 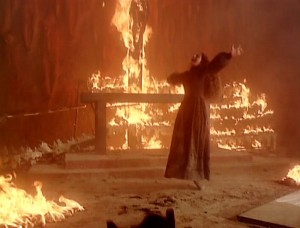 Despite some similarities with others works in the subgenre, Alucarda truly has a life of its own. It’s one of the definitive works of Latin horror, and helped pave the way for directors such as Guillermo Del Toro. This will always be held in high regard, as both a provocative work, and a strong statement on the times from an underrated director.