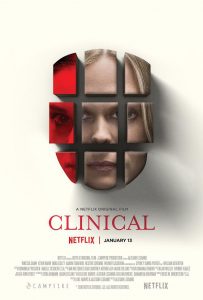 To pretty much everyone’s surprise, Netflix only VERY recently revealed that today would see the release of the psychological shocker Clinical, helmer Alistair Legrand’s follow up to 2015 festival favourite The Diabolical. With Netflix already proving itself a horror force to be reckoned with, having put out a diverse range of fresh and unique movies – Spectral, Rebirth and I am the Pretty Thing That Lives in the House to name but a few – Clinical is yet further proof that the heavyweight streaming champion of the world won’t be letting its guard down any time soon.

Co-written by Legrand and Luke Harvis, Clinical follows Dr. Mathis (Vinessa Shaw), a psychiatrist who attempts to get her life back on track after a violent attack by seeking to repair the life of a new patient (Kevin Rahm), but he has his own terrifying history.

With Clinical releasing on Netflix EVERYWHERE today, January 13th, we caught up with Legrand to talk about taking a much more personal and psychological approach for his sophomore project…

SCREAM: Clinical particularly resonated with me as I originally studied a degree in psychology but ultimately didn’t think it was the right career choice for me as I didn’t believe I was emotionally strong enough to be able to listen to patients’ problems and distance myself from them enough to be able to help them appropriately. Accordingly, I found myself identifying with the film’s protagonist as she battles her own demons – essentially the result of the toll her work as a psychiatrist has taken on her. What inspired Luke Harvis and yourself to tackle this subject matter?

Alistair Legrand: You can still be a psychologist! But yes, I agree with you. It would be hard to turn the empathy mechanism off, and part of the reason why this world fascinates me to no end is that idea — how close do you get to the fractured psyche that you’re trying to repair?

It’s a story I’ve wanted to make for a while. The idea that sticks in the back of your head and keeps bothering you until you do something about it. It definitely stems from growing up around this world, observing it, watching how psychologists/psychiatrists and patients “dance.” One particularly grim story I heard about a psychiatrist and her home office sealed it for me. Luke wanted to tell a story about how uncomfortable sharing can be, how unnatural it is at times, and how no one really tells the truth, even to themselves. We loved making The Diabolical but wanted to do something quite different as the second; more adult and very personal; heavy but exciting like the psychological horror films that came out in the early ’90s. So, after we brought the script to Ross (Dinerstein) and developed it, we approached Netflix.

SCREAM: Maybe it’s just me reading too much between the lines, but I could sense quite the scathing commentary on mental health care, particularly when it came to the topic of excessive reliance on medication to treat mental disorders. Having said that, you also insinuate how traumatic and “possibly” detrimental exposure therapy may be. What kind of conversations did Luke and yourself have in the writers’ room when it came to tackling this subject matter? To me, the whole thing paints quite the skeptical picture of mental healthcare. Was this for the sake of storytelling of is there more of a personal opinion there that you wanted to highlight?

AL: Oh wow, that’s a mighty question and we might have to come back to it after the movie comes out. Through the lens of a (hopefully) exciting thriller we’re able to discuss modern mental healthcare. I think that that’s what’s so wonderful about genre storytelling — I could discuss the idea and have it factor into our story in a major way. There are a million personal conceptions about modern psychotherapy in the film but I don’t want to ruin it for the viewers. There’s no perfect way to treat the extremely fragile human mind and I hope the movie reflects that.

SCREAM: Related to the previous question, the psychiatry sessions are very involving thanks to the dialogue and also the unique way they were shot. What challenges did you come up against in terms of the way you shot those scenes to keep things very palpable and involving? You must have also had your work cut out for you in terms of psychiatric research?

AL: I wanted to make sure our major sessions felt grounded and realistic. To provide a bit of verisimilitude I had a close family member, who is a psychologist, provide very valuable research and insight into how doctors and patients behave in those rooms. The dialogue was based on a combination of this research and my own insecurities during therapy sessions.

John and I made sure that every major scene had a very strict shooting plan. We really wanted to reflect the inner turmoil of the characters in the shot selection. A lot of therapy scenes in film and TV are just coverage and we absolutely didn’t want to do that. We wanted to tell Alex’s and Jane’s story with where we put the camera. There are a lot of silences and pregnant pauses in therapy so let’s show the audience what that’s really like and bring our characters together slowly as the movie progresses.

SCREAM: Talking of which, you’re back with the same cinematographer, John Frost. He’s on top for this time but I felt that the use of cameras was quite different this time round. I know De Palma and Zemeckis were big influences when it came to the visuals in The Diabolical. What aesthetic did you have in mind when you set about filming Clinical?

AL: John and I tend to go kitchen sink nuts when planning a project but we really looked at early Curtis Hanson thrillers like Bad Influence and The Hand That Rocks the Cradle in terms of tone and Danish films such as The Hunt for a more organic but emotional lighting style. And I don’t want to ruin the ending but Misery’s shot selection was an example and how they reveal her psyche with camera blows me away. We really wanted everything to have a grounded elegance to it and tried to hide the color red until it meant something, whether poetically or dramatically.

SCREAM: Also on top form again is Ian Hultquist who also scored The Diabolical? He was clearly on the same page with you and Luke Harvis in terms of the kinds of sensations and vibes you wanted to create and/or augment in each scene. I know how much you love working on the music as that side of filmmaking is what originally influenced you towards becoming a filmmaker. Can you walk us through your working process with Ian?

AL: Ha yes, Ian is my third writing partner after Luke Harvis and John Frost. He now reads my scripts from the very, very early terrible drafts so he’s always involved from the get go. It’s helpful – we all know what movie we’re making way before production. It helps keep a consistent vision. Ian and I love score and the delicate balancing act of audience manipulation but on this project we were surprised to find success with taking music OUT of scenes, just letting them play out organically. It actually HELPED the score because Ian was able to really chisel out the profound moments and create a bigger impact when we actually needed music. This was the first time Ian and I were able to use a very small choir so that was like Christmas. Ian really vibed with the melodrama and beauty of the piece so we felt like a choir was the perfect match. It was fun watching him come up with specific sounds for each character. I’m very proud of Nora’s “Theme” which is mostly slowed down sleigh bells hitting the ground.

SCREAM: Once again we see a young girl (not as young as in The Diabolical, but young all the same) in dire and pretty gruesome circumstances. I’m guessing your experience working as a counselor at a camp every year where you teach kids how to make movies once again came in very handy to talk Nora through the motions, especially as she has some of the most horrific moments in the movie.

AL: Casting Nora was very difficult. I never want to insult people that are struggling with their own mental issues so I really needed an actor with the fragility but also with something going on behind the eyes; an actress that will make you care about her but also flee in the other direction! It would be easy to cast just the twitchy creepy girl but India walked into the room and blew us away with her emotional intelligence. She understood completely what we were trying to do. She’s a tremendous actress and I would often find her alone getting into character. People were always gathered around the monitor in shock whenever she was being intense. It’s hard to find that magnetic quality.

SCREAM: Last time we spoke you mentioned you had a couple of versions of a possible sequel to The Diabolical and you were also working on another film along the lines of The Hitcher? Are those still on the cards or have your plans changed since then?

AL: I’m still working on what you’re talking about which is called TOW. I’m looking for financing and very much want to make it. It’s a desert rampage film with a tow truck, nothing better. We wrote a lot of scripts during The Diabolical release waiting period so now we’re just going to kick the tires and see what’s the most exciting. I loved making psychological horror so hopefully someone lets us do it again.

We’d like to thank Alistair for taking time to speak with SCREAM and we seriously suggest you catch Clinical which is available everywhere on Netflix right now.