Few movie franchises have the same sort of genre defying influence as Alien. Not only did it redefine both horror and sci-fi with its creeping, tense atmosphere and Giger-drawn aliens, but it thrust forward female led action movies, a sweeping extended universe, and has been a family favourite since it hit theatres in 1979. That’s almost forty years of fun! So, of course, anything with a five movie franchise and whatever the hell Alien vs. Predator was, will almost automatically have a comic series hot on its heels and thanks to Dark Horse comics, the comic series is almost thirty years old itself.

Their newest addition to a quite staggering line up of Alien works is Aliens: Dead Orbit, a comic written, drawn, and lettered by one-man team James Stokoe. The comic focuses on the survival of a man who is left to fight the aliens that have boarded his ship and the utter madness that consumes said man in the dark reaches of space. With Stokoe’s practiced hand, his claustrophobic art work will surely bring you to the edge of madness yourself.

The comic starts off with one man, one space station, and the ever-expanding sea of the unforgiving universe. Long stranded and running out of resources, he reflects back to how he got into the mess in the first place. Suddenly, we get transported to weeks (months?) earlier when the ship was bustling with life and ball busting sass. Amidst the hustle and bustle, a distress signal reaches them from an abandoned ship to which space protocols requires them to answer. Little do they know the insanity that awaits them on the ship and the evil that follows them back.

Though the synopsis I have given doesn’t give much description, you honestly wouldn’t want more. It’s one those comics that’s hard to talk about without spoiling it and with an April 27th release date, I would hate to kill the anticipation. That being said, this is a fantastic comic. Stokoe creates the perfect sense of tension and isolation that made the movies so popular in the first place. The first few pages lack any real spoken words as Stokoe chooses to focus on the deep silence of an abandoned ship. He allows the protagonist to exist solely through movement and his relation to the spaces around him. You inherently know there’s something wrong and it’s not just because there are pieces floating off the ship in the first panel, but the unforgiving sky and the dark shadows that surround it. 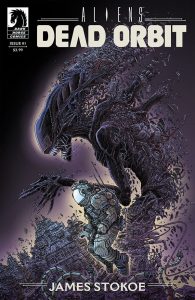 As the creator of the award winning comic Orc Stain, Stokoe has had plenty of experience of handling highly demanding works. His attention detail is par-none and that’s not a compliment, that’s a fact. It’s ridiculous. Everything that can have details in it, has details in it. The clothes have wrinkles, the walls have scratches and buttons, there are tubes and keyboards and very detailed compute panels. Every bit of debris is painfully detailed to the point where you want to get a jewellry eye magnifier just to not miss a single line of ink! It syncs up beautifully with the original Giger artwork, since Giger himself was quite the stickler for details. If you want to see what the depths of one man’s dedication to his practice, Stokoe’s work is the way to go. The Alien’s series is definitely richer for having him.