Aliens Claim What’s Theirs in the Trailer for Final Recall

We recently shared with you the release date of Mauro Borrelli’s Final Recall – also known as The Recall in the US – and now we have the UK trailer to share with you.

Starring Wesley Snipes (Blade franchise), RJ Mitte (Breaking Bad) and Jedidiah Goodacre (Monster Trucks), Final Recall follows a group of friends as they spend the weekend at a cabin. However, their holiday is far from the peaceful getaway they were hoping for, because aliens start to invade earth. To survive, the group have to rely on an eccentric hunter who believes the alien attack has been prophesised for years. 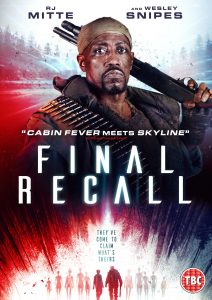 The trailer shows some impressive effects and moments of nail-biting action, but I would argue that it shares just a little too much. With a great cast and concept as compelling as this, it is impossible not to be intrigued by the film as a fun, popcorn-chomping sci-fi actioner. Also, who isn’t interested in seeing Wesley’s Snipes in his first leading role since 2012’s Gallowwalkers?!