The Aliens Celebrate in a TV Spot for Independence Day: Resurgence 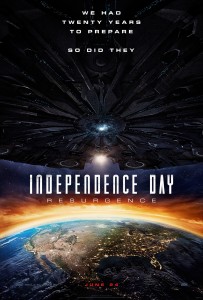 A TV spot for Independence Day: Resurgence has been unleashed online and it shows the aliens having an early celebration as their mothership prepares for Round 2 against Earth. Maika Monroe’s character Patricia notices the captured aliens are screaming, but apparently this is their way of rejoicing that “she has arrived”. It’s all very ominous and setting up Independence Day as a strong contender for one of the best blockbusters of the year.

The film is set 20 years after the initial attack and sees the aliens return to finish where they left off all those years ago. You will notice many familiar faces including Bill Pullman and Jeff Goldblum – how long they last in the sequel is the big question – as well as some newbies in Liam Hemsworth, Charlotte Gainsbourg and, of course, Maika Monroe.

We’re very excited to see what Independence Day 2 offers and if it’s as exciting and visually impressive as the footage we’ve seen so far, then we should be in for one hell of a treat when the film hits our screens on 24th June.