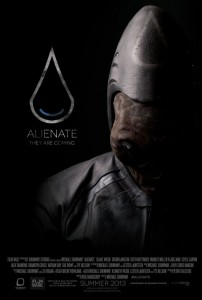 Synopsis:
With his marriage in tatters, David (Blake Webb) leaves on a business trip across country, hoping that some space will give him and his wife time to think things out. However, when phone communications begin to collapse and airplanes start inexplicably crashing from the skies, it soon becomes clear that the country is under attack from forces not of this world. With time running out, David begins a desperate journey back home, in the hope he can reach his wife before it is too late for them all.

I did, in all honesty, begin watching the new horror/sci-fi Alienate with reasonably high hopes. The poster for the drama by debut director Michael Shumway – this is his first main feature, his previous screen outing being the 2011 action short The Edison Effect – gives the impression of an epic space adventure along the lines of Ridley Scott’s 1979 genre busting masterpiece Alien. It was not long though before I realised that this dire exercise in inexplicable tedium is lightyears away from anything remotely entertaining, let-a-alone scary or tension filled.

I have always felt, where criticism is concerned, that there is usually at least one point to find in a film’s favour – whether it be script, cinematography, casting or direction etc. Occasionally however, something comes along which is so totally inept that to give it any kind of recommendation would be to do the viewing public an injustice.

But – simply because it’s part of my job – I must try, no matter how briefly, to say something about Alienate. One of its problems – amongst a myriad of flaws – is that it ends up trying to be something which it isn’t – namely a drama. This film sells itself as a horror / sci-fi hybrid, and there are attempts to raise a few chills through occasional interjection by monsters and their various unfortunate victims who pepper the plot, as well as the full-on invasion which takes up all of about the final five minutes. Other than this however we are subjected to a tedious road-trip where the character of David spends much of his time having flashbacks to the wife he has left behind. Webb, who admittedly appears to take his role as David quite seriously – well I guess someone had too – has built up a reasonable resume in a comparatively short amount of time, including a role in the hit television series American Horror Story in 2015. One can only hope that he goes on to bigger and better things and puts Alienate down to one of those unfortunate career blips which we all have now-and-again.

Over the years I have met various film makers and writers who have produced genuinely fresh, exciting and original material but, through the vagaries of the system have never got their material beyond the drawing board. Which makes it all the more galling that films like Alienate actually get funding let-alone make it as afar as a finished product. Films like this – as with many forms of ‘art’ out there – should however give hope to those who believe they have something genuine to offer. If something like Alienate can get made, distributed and put out there in the public domain, then there is surely hope for everyone.

I feel slightly dishonest even giving Alienate one and a half stars, as it really is one of the most boring pieces of inane drivel which I have forced myself to sit through for some time – which is saying something considering some of the films I’ve watched. However, I guess those involved deserve some marks for effort if nothing else, as they clearly believed they were, on some level, making a gritty, entertaining adventure film. I’m tempted to re-watch it on the off chance that I may have nodded off during the few good bits there were. But I’m no masochist, and watching this film even once felt like one time too many. I will put having seen it down to my civic duty if only so that I can warn this website’s readership to steer well clear of it.