Synopsis:
The crew of the Covenant discover an uncharted paradise, but they are devastated to discover that the planet is overrun with a deadly threat that forces them to evacuate as fast as they can. 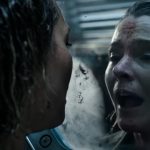 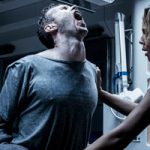 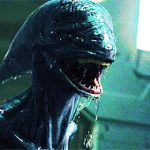 The anticipated sequel to Prometheus has finally arrived and as many fans were disappointed in 2012’s offering, it would be safe to say that all their hopes are resting on Covenant restoring their faith in Ridley Scott’s monstrous franchise. But, does Covenant manage this hapless task or does it, once again, offer something admittedly bold, but otherwise hollow?

Alien: Covenant will divide audiences once again, with many certain to be disappointed in its preoccupation with larger and more abstract ideas over the neomorph and xenomorph creations that we, as fans, love so much. However this time, there is the unmissable feeling that Ridley Scott has taken on his fans’ grumbles about Prometheus and crafted a film that caters to those who want to see proper Alien destruction. In what can only be described as depicting glorious carnage, Alien: Covenant is effortlessly scarier and far bloodier than Prometheus. If fans want to see multiple aliens tearing apart their human victims in viciously realistic fashion, then Covenant is the frightening and fierce sequel that they have been waiting for.

This is definitely a nail-bitingly tense addition to the Alien universe, where Ridley Scott does what he does best and creates another menacing and beautiful world for his creatures to dominate. The planet is captured with striking cinematography, where the film’s ominous threats are consistently teased through a familiarly stark and grey colour palette. The crew’s hope for paradise is eventually shattered, but the warning signs were there from the start.

A frequent idea presented in the entire franchise is the idea of curiosity leading to demise and Covenant, once again, suggests that some things are better left undiscovered. The to-and-fro between silence and an expectedly sinister soundtrack, conjures a predictable tension but one that is easily effective. When combined with the immediately foreboding entrance of Michael Fassbender’s David and the announcement of what he’s been up to for the last decade, it is impossible not to feel a little uneasy for the Covenant crew.

The crew themselves are perhaps the most disappointing aspect of Alien: Covenant, because they are without the sense of camaraderie that is so important for a film such as this. Part of the reason why Alien and Aliens are such strong fan favourites is down to the crew that we are journeying with; their commitment to one another, their realistic desire to survive and their subtly humorous outlook on their situation creates a believable and interesting set of characters that we will genuinely like. Covenant does not manage this and leaves us with a set of under-developed characters with very little personality.

Despite beginning the film on an emotional note, it is impossible to feel empathy or sympathy for Katherine Waterston’s Daniels, because we are not given the chance. She is not the kick-ass character that we were promised and it is her who is the most disappointing. The strong female character is a signature of the Alien brand and Daniels not make the cut. The human characters are overall abandoned for a focus on Walter and David, who are the stars of the show and played brilliantly by Michael Fassbender, but it is a shame that the rest of the cast are not given very much to get their teeth into.

By continuing the events from Prometheus where David and Elizabeth sure have decided to journey to the Engineers’ planet, we see the black goo has evolved and mutated over the 10 years that have passed since the doomed Prometheus expedition. Prepare for more stomach-churning chest-bursting scenes of alien birth, but also a generous helping of difference that aims to set the film apart from its other Alien counterparts. The film’s more fast-paced moments of alien terror are counteracted with moments of quiet poignancy where the film is allowed to explore its deeper ideas surrounding creation and the inevitably instantly damned decision to discover your creator. The clashing of these opposing moods crafts a film that is equally as terrifying as it is elegant, but not without its own imperfections. Alien: Covenant’s shifts in tone sometimes feel uneven, but if you can accept its different identities then you’ll start to appreciate this complex and purposely unfinished tale.

Alien: Covenant is a blend of Prometheus’ thoughtful explanations where David’s quotes from Ozymandias and interest in the gods’ entrance into Valhalla continue to tease the franchise’s reflection of a society’s damnation, which then births a new and more powerful leadership. The xenomorphs are born from death of their hosts and Covenant continues to pose the idea that there is no room for humans in a new world, one that has been intricately designed and created like a perfect portrait, but by who? And how? And why?

Covenant will answer questions that were left behind in Prometheus, but counters this with the addition of even more questions. It’s a frustrating unravelling of events, but it’s important to remember that there is still a long way to go until we reach the events that take place in 1979’s Alien and patience really is a virtue. I, personally, think it is commendable and exciting that Ridley Scott is striving to give his worlds a greater meaning, steering his franchise away from the excellent but simple, creature feature that it started out as. Alien: Covenant continues to develop the profound beginnings set in Prometheus, moving his story forward intelligently, if somewhat predictably. 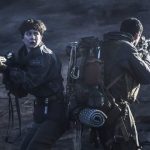 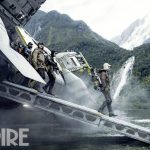 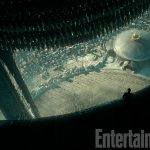 There may be some disappointment when Alien: Covenant draws to a close, because despite the film’s brilliant horror centre that understands the need to scare its audience in real Alien fashion, the cumulation of the events and the promise of what’s to come is astonishingly underwhelming. The film adopts a thematic strand that we’ve seen countless times in sci-fi actioners and for Alien: Covenant to eventually follow this route too, may leave a few fans surprised and disappointed.

Alien: Covenant is a menacingly exciting sci-fi horror that pulls no punches. With exciting moments of blood-drenched horror, tension and shocking scenes of action, it is a move in the right direction. It is not without its problems and will certainly split the crowds – most likely being hated by plenty, but I am on-board for Ridley Scott’s epic and can’t wait for more.

Alien: Covenant will be released in the UK on 12th May and the USA on 19th May.