ALICE, SWEET ALICE REMAKE IS STILL IN THE WORKS

One of the most overlooked horror films of the decade, 1976’s Alice, Sweet Alice was rumoured to be getting a remake way back in 2012. Dante Tomaselli, cousin of Alfred Sole, the original film’s director, was said to be helming the project, but other than a few murmurings here and there, the project seemed to have gone completely silent. 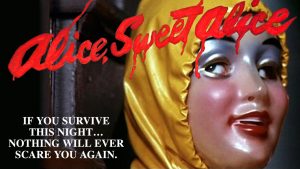 While discussing the upcoming Blu-ray release of his cousin’s film, however, Tomaselli recently made it known that his remake is still in the works. He didn’t share any more details, but it will be interesting to see what will come of this project. Hopefully we won’t have to wait another seven years to find out.

In the meantime, you can look forward to Arrow Video’s upcoming Blu-Ray release of the 1976 classic. In addition to the restoration print, we may soon be able to get our hands on official Alice, Sweet Alice Halloween masks from Trick or Treat’s Justin Mabry.