The official poster for American Horror Story: Double Feature has arrived—and it looks like we’ll be seeing creatures from another world! 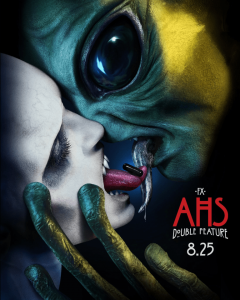 American Horror Stories: Double Feature premieres on FX in the US on August 25th. With the Fox channel shutting down in the UK, it’s unclear when or where the series will arrive across the pond, so watch this space… and the skies!