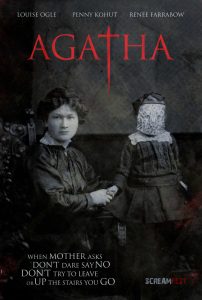 Synopsis:
Young Sophie (Louise Ogle) has been hired to bring food every night to a mysterious old woman who is locked in an attic. Is the old woman a prisoner? Is she dangerous?  Each night, as Sophie completes her task, her curiosity draws her closer and closer to what might be her last meal.

Agatha is a nine-minute period short film from up and coming Floridian filmmaker Timothy Vandenberg, and it’s been garnering a substantial amount of buzz on the festival circuit. It’s also the product of a filmmaker announcing his arrival in spectacular fashion, as it’s more than a simple short film – it’s a stepping stone to a promising career in feature films, and an exercise in horror at its purest.

From the very outset Agatha is imbued with a chilling sense of dread, capturing an overwhelming feeling of tension that both grips and enthrals. The premise itself is simple but rife in mystery; a little orphan girl is tasked with delivering food to someone who lives in an attic, but she’s warned not to ever pass the table and get close to the person. However, being the young and curious sort that she is, she becomes more tempted to investigate further… and you know how these things tend to turn out. Will Sophie’s fate be akin to that of those who have broken the rules before her?

Apart from the initial conversation which sets up the task at hand, Agatha is dialogue-free – and it works to great effect. The unsettling sound design works dividends for creating unease, while the ambiguity throughout is quite disconcerting. Furthermore, there’s just something inherently creepy about period settings in horror, while the poverty-stricken child protagonist and her natural childish curiosity towards the dark allure of a captive is disturbing in itself.

The central performance from Louise Ogle is also magnificent as she plays her part with convincing naivety. You don’t want to see anything bad happen to her and the emotional attachment makes you fear her plight in every frame. That being said, Agatha is a cautionary tale which will make any viewer – young and old – question whether it’s worth intruding on the business of others. Ogle’s performance is a powerhouse for an actress of such a young age. 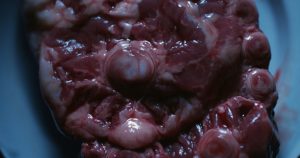 Agatha packs a lot of terror and emotional heft into its short running time. Whatever Timothy Vandenberg will have the attention of those who see Agatha, and there’s no doubt that he’ll go on to achieving great artistic feats as a filmmaker. Horror this unnerving doesn’t come along too often in this day and age, but when it does it reminds you of why you fell in love with the genre in the first place – as a child, drawn to the mystique of the danger, must like young Sophie.