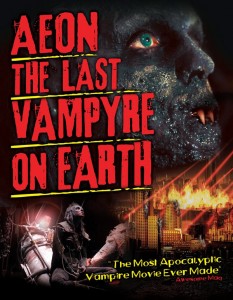 Synopsis:
As the apocalypse reigns outside, Catherine finds herself trapped in an abandoned warehouse with an ancient evil that is intent on making her final moments on earth a living hell.

In one of the most scaled down explorations of vampirism I’ve ever seen, Aeon: The Last Vampyre on Earth’s events take place solely in an abandoned warehouse. If you’re after an action-packed, exciting post-apocalyptic feature that is filled with explosions, aliens, drama and death, then this is not the film you are looking for. If the idea of a minimal and reflective depiction of the end of the world tickles your fancy, then look no further, because this is a dialogue-heavy and thoughtful presentation of the apocalypse and, for some, it will be a chore to get through.

I admit that I neither loved nor hated this film and sit firmly in the middle realm. On the one hand, it is easy to appreciate the core idea at this film’s dark heart as it chooses to use horror as a façade for a story that is very much concerned with the meaning of life, our place in the world and the destruction we, as humans, have caused to our planet. The last vampire’s role is to explain to Catherine – and us – the real, horrible truth about our existence as he tells us stories that date back to the Great Plague. There is an interesting and nicely-thought idea behind this blend of sci-fi and history, but there is an unmissable amount of repetition and familiarity in his words as he describes humans as maggots and the problems with our understanding of reality and life. It all trickles down to the idea that humans are the real monsters, not he. It is too easy to find the fatal flaws in this film’s minimalist scrutiny of life and death as it teeters along on its preachy line, never truly saying anything unheard or meaningful. The vampire says all the right things as he curses Catherine Murnau – great name, right? – and the human race in general, but don’t we already know how much wrong our species has done?

The Last Vampyre’s slow-burn approach begins instantly when we are introduced to Catherine as she finds shelter from the apocalypse in an abandoned warehouse. When she notices a dead body on the floor, a suitcase and a strange “metal coffin”, she realises she might have been safer outside. The first 20 minutes of the film make for a frustrating build-up with many of the shots being replicated and repeated to ramp up the suspense. An air of mystery is immediately established with the film’s lack of dialogue and preoccupation with silence, but there are only so many times that a lingering, ominous shot on a suitcase can rouse fear before it becomes plainly ridiculous. This attempt to deviate itself from expectations becomes pretentious rather than refreshing, something that Daniel Falicki manages  with his later film Accidental Exorcist. The Last Vampyre fast loses its intrigue when you can hear the turning of the cogs in the director’s head as he tries to create something strange and beguiling, but unintentionally, this begins to feel like a gimmick that is desperate to be mysterious, but ends up alienating the audience.  Pick up the damn suitcase, Catherine!

The film properly begins when all this slow-paced nonsense comes to an end, a warning red light starts flashing and we get our first look at the Daniel Falicki as the vampiric creature. This moment is captured strikingly as Aeon places himself perfect beneath the now stilled radiant red light, causing him to look like the demonic, shadowy creature we are expecting. It’s a wickedly executed and tense scene that works perfectly with the film’s slow pace, because the unveiling of Aeon’s full, grisly, form has the wanted shocking and uncomfortable effect on the audience. He coughs and splutters, dragging himself along the floor as Catherine describes the mayhem unfolding outside; hypnotic and eerily angelic music plays against the scene, cementing it as an unsettling, atmospheric introduction to the creature that will be at the centre of the film’s hefty remaining runtime. 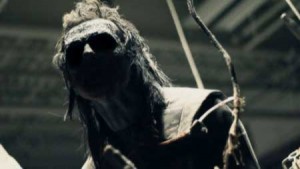 Aeon: The Last Vampyre is probably best described as a wasted opportunity. What should have been a poignant and insightful journey falls flat, never quite managing to secure the depth or satisfaction that should be present in a film that is trying so hard to be so different. It is an, at times, striking visual treat, but there is very little beneath this alluring outer shell.