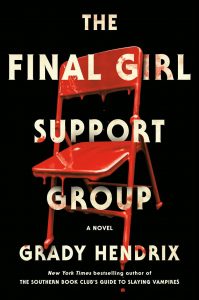 “I could NOT be more excited!” Hendrix enthused on Twitter. “Adrienne King, the first final girl in the first Friday the 13th movie, is the narrator of the Final Girl Support Group audiobook. Adrienne has been a huge supporter of my book and I’m honored to have her on board.”

The Final Girl Support Group follows Lynette Tarkington, a real-life final girl who survived a massacre. For more than a decade, she’s been meeting with five other final girls and their therapist in a support group for those who survived the unthinkable, working to put their lives back together. Then one woman misses a meeting, and their worst fears are realized—someone knows about the group and is determined to rip their lives apart again, piece by piece.

But the thing about final girls is that no matter how bad the odds, how dark the night, how sharp the knife, they will never, ever give up.

Hendrix’s other books include Horrorstör, My Best Friend’s Exorcism, We Sold Our Souls, and The Southern Book Club’s Guide to Slaying Vampires. The audiobook version of The Final Girl Support Group will be released on the same day as the physical novel.