Adjust Your Tracking for Beyond the Gates Home Release 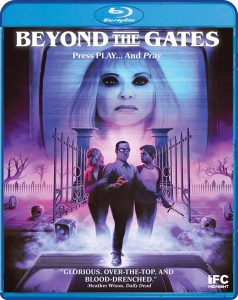 It’s been a bit of a wait but Jackson Stewart’s awesome slice of retro, VHS-lovin’ radness Beyond the Gates finally makes its US home video debut on May 2nd. Released by Scream Factory in conjunction with IFC Midnight, the DVD and Blu-ray contain a host of special features sorely missing from the UK DVD, which came out in February.

Harking back to VHS-era classics such as Poltergeist, The Gate and The Beyond, Beyond the Gates stars rising horror star Graham Skipper (Carnage Park, The Mind’s Eye), Chase Williamson (The Guest, SiREN), Brea Grant (Halloween II, Dexter) and the legendary Barbara Crampton.

Two estranged brothers reunite seven months after their father’s disappearance to liquidate his anaemic video store. While there, they unearth an old VCR board game that acts as an inter-dimensional hub to a nightmare world where their Father’s soul is trapped and can only be saved by playing the game. The film is an adventure horror that pays loving tribute to the VHS format, video stores, and board games of the era.

The film will come with audio commentaries from Jackson Stewart, Barbara Crampton and the cast and crew, a behind the scenes featurette, deleted scenes, a retro-style Beyond the Gates commercial and the theatrical trailer.