IT Adaptation Finds its Pennywise 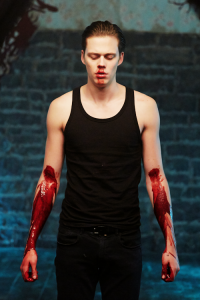 After a week that has seen conflicting reports and various names bandied about, it seems we might just have our new Pennywise. It’s been a long and rocky road getting the upcoming feature adaptation of Stephen King’s It into production, but with the film set to start shooting in Toronto this summer, that coveted villainous role is apparently all but cemented for 25 year-old Bill Skarsgård.

Original choice Will Poulter was very much still in the running following the departure of director Cary Fukunaga last year, but has since pulled out due to scheduling conflicts. Then this week, reports of auditions taking place started to throw out names including that of Kirk Acevedo, known primarily for his TV roles in Band of Brothers, Oz and Fringe, and more recently seen in Dawn of the Planet of the Apes. No sooner had Acevedo been named as the leading choice however, than THR reported that Hemlock Grove’s Bill (son of Stellan, brother of Alexander) Skarsgård was in final negotiations for the part of the ancient evil in clown guise.

Under the helm of Mama director Andy Muschietti, the adaptation will take the form of two films, the first following ‘The Losers Club’ as they battle Pennywise as children; the second following the now-adult friends reuniting when the clown returns.

I still can’t quite believe this is happening. Fans of King’s epic novel have waited a long time for the kind of adaptation the book deserves, with the already slightly under-cooked 1990 miniseries not having fared well with age. It says a lot for Tim Curry’s searingly evil portrayal of Pennywise then, that the character is such a recognisable and celebrated horror screen villain. We’ll see how Skarsgård (pictured here in Hemlock Grove) fares when the first film is released on September 8th, 2017.