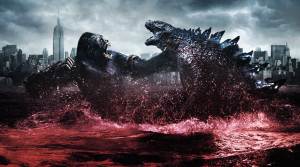 In 2014, Gareth Edwards graduated from directing the low budget Monsters to the mega budget Godzilla, and we now know that Trick ‘r Treat helmer Michael Dougherty will be tackling Godzilla: King of the Monsters in 2019. Well, more sound decision making on the part of Legendary and Warner Bros. has followed, with the announcement that they have secured Adam Wingard for monster mash Godzilla vs. Kong.

The exciting news was broken on Tuesday by THR, while Wingard himself tweeted: “I’m really very excited. This is a total playground.”

Appearing on the scene a decade ago with micro-budgeters such as Home Sick and Pop Skull, Wingard quickly rose through the horror ranks with You’re Next, segments in V/H/S, V/H/S/2 and The ABCs of Death, The Guest and last year’s Blair Witch. It’ll be very, very interesting to see what he does with this new opportunity.

A writers’ room was assembled back in March to work on the script for Godzilla vs. Kong. It was led by Terry Rossio (Pirates of the Caribbean), who was joined by Patrick McKay and J.D. Payne (Star Trek Beyond), Lindsey Beer, Cat Vasko, Maze Runner writer T.S. Nowlin, Jack Paglen (Transcendence), and Babylon 5 creator J. Michael Straczynski. No plot details managed to escape.

Godzilla vs. Kong is expected to destroy big screens on May 22nd, 2020.