Leigh Whannell’s action-packed and acclaimed Upgrade will be hitting DVD and Blu-ray this 28th August. The film will be unleashed a little earlier on Digital, so if you’re not bothered about physical copies, you can get your hands on it on 14th August. 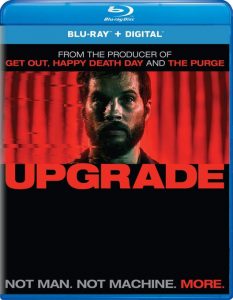 The film centres on Grey Trace, a technophobe in a utopian near-future when computers control nearly everything – from cars to crime-surveillance – who is paralyzed in a freak mugging. But when a billionaire technologist offers him an experimental paralysis cure – an implanted computer chip called STEM – Grey finds that the chip has a voice and a mind of its own.

We’re excited to see Leigh Whannell’s second feature as a director after Insidious: Chapter 3, and it seems like he’s put his all into this one. It’s like Hardcore Henry without the nauseating first-person perspective, Robocop with added blood, guts and gore and a generous dose of John Wick’s stylish visuals. In short, it looks GREAT. Remind yourself of the trailer below.