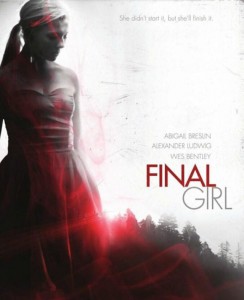 It’s hard not to love a woman who doesn’t just let horror killers walk all over them and Abigail Breslin takes the charge as she fights back against some psychotic boys in Final Girl.

The first UK trailer for Tyler Shield’s stunning yet brutal film hosts a mix of stunning cinematography with some really awesome kills from Breslin.

Brought to life with Tyler Shields’ eerie, evocative vision, “the idea behind FINAL GIRL was no CGI, no fake effects. I wanted it to be as real as it could be,” he says. “The fights are real, the cold was real, and therefore, the performances are real. It was certainly a challenge, but I think everyone in the movie will agree it was worth it.”

FINAL GIRL follows a group of charismatic yet sadistic boys who every night trick a young, blonde girl into meeting them for a date with the intention to hunt and kill her. However, their horrifying ritual takes a turn when they select the beautiful Veronica (Breslin) as their next victim. When the hunt begins, the boys soon realize they messed with the wrong girl.

Synopsis:
Loner Veronica is new to school, shy and vulnerable, the perfect target for a group of teenage boys who lure girls into the woods to hunt and kill them for sport. It’s only after they get her alone that she turns the tables on them, escaping and revealing she’s armed and knows how to defend herself. Little do they know, Veronica is an assassin-in-training, and she’s chosen killing these boys as her final test. When the dust clears, Veronica will find out if she can be the final girl these boys ever have a chance to hurt.