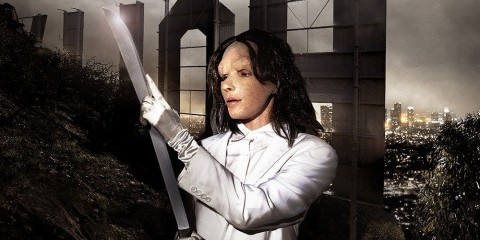 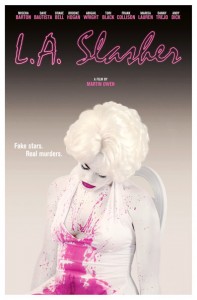 Synopsis:
One man decides that enough is enough and heads out on a slaughter spree of the mindless and talentless celebrities that dominate the media, under the name of the L.A. Slasher.

The original title of Abducted is L.A. Slasher which is a far superior title that fits the personality and style of the film a whole lot more. It’s a film all about visual style and visual excess, but ‘Abducted’ sounds like a Bruce Willis thriller. However, as the film progresses it becomes clear that this is an audience friendly flick that is keen to reach as many peoples possible and teach us all to stop idolising so-called celebrities. Considering its concept, it’s surprising that it may have deemed its original title a tad too violent, but alas, here we are.

The film begins promising us a bold and bloody horror film as a woman stumbles in the desert drenched in her own blood. Sadly, the film’s blood-levels peak at this moment and the rest of the runtime is disappointing in terms of blood, guts and gore. This is a shame, because Abducted offers a pleasing visual palette filled with bold colours and jazzy editing, and to couple this with a consistent level of fearless violence would have made it all the more striking. Gorehounds will be disappointed with Abducted’s lack in this area, and the film would definitely have benefited from showing the deaths that are central to the narrative. Instead, many of the murders happen off-screen and we’re left to enjoy the sultry sounds of screaming. 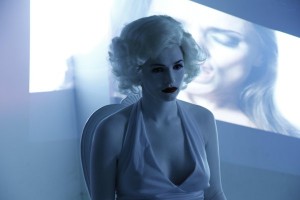 Abducted, perhaps purposely, sinks into its own trap and allows itself to be dazzled by the bright lights of Hollyweird that it claims to hold so much hate. The film is awash with bright pinks, blues, yellows and greens, on-screen dialogue that shows tweets and fake news casts. Its exterior is as frenzied and unstoppable as the L.A Slasher’s murder spree that barely stops to check itself in the mirror. The entire film is an onslaught of manic, stylish vibrancy with an electronic dance soundtrack ripped straight out of an ‘80s movie. In short, it does what the hell it wants, when it wants. Does it always work? Of course not. There are times when the film hides behind this frenzied editing in the hope that you won’t dig any deeper and discover that the message it’s trying to convey is a little outdated. Yes, we’re a society dominated by reality TV and celebrities, but this comment on culture was explored by David Cronenberg , Martin Scorsese and countless other film-makers way back in the early ’80s. “Since when did everyone just want to be famous”? Since the dawn of stardom in the 1950s, probably.

It’s a little bit difficult to take this film’s comment on fame seriously when it embodies many of the ideas it loves to hate. Abducted itself is filled with stars that include Drake Bell, Mischa Barton, Danny Trejo, Dave Bautista and Eric Robters – many who have short cameos and, well, die pretty soon. The slasher himself becomes a celebrity with millions of viewers loving his live videos that show the demise of ditzy z-listers and he has his own damn Twitter account. He even gets a haircut to ensure he always looks fabulous.  It’s difficult to swallow this as a pop-culture satire when it is using the world it is supposed to detest to sell itself. As a very basic and silly commentary it just about works, but as an in-depth, probing and unique statement about modern society it misses the mark. 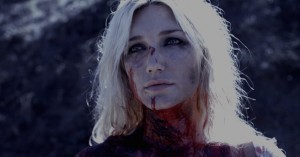 Abducted has the exterior of a great film, but does not have the depth or interior to go with it. Its comment on celebrity culture, fame and the state of modern society gets lost the further the film treads. Rather than being the intelligent satire it so tries to be, this is not much more than a pretty, well-edited feast for the eyes. It certainly won’t change the world, but on a very basic level, it sure is an entertaining and fun 80 minutes.