The ABCs of Death 2 ½ Coming to Vimeo

When a competition was launched for budding filmmakers to shoot an ‘M’ section for alphabetical anthology The ABCs of Death 2, the producers had to pick through countless impressive entries before settling on Robert Boocheck’s M is for Masticate. They received so many good ‘uns in fact, that they have now cut 26 of them together for the next entry in the series, entitled The ABCs of Death 2 ½: World Competition Edition. The film will be available exclusively on Vimeo from next week. 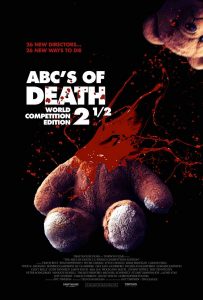 According to the film’s press release, the competition received “…more than 500 three-minute long entries from over 40 countries,” which were whittled down to “…26 finalists, providing fans 85 minutes of unadulterated madness, including ‘M is for Marauder,’ ‘M is for Malnutrition,’ and ‘M is for Mariachi,’ along with plenty more new nightmare fuel to tide them over until the next numbered segment in the series.”

Producer and series creator Ant Timpson says in the press release: “The production team had a real blast selecting the 26 shorts that make up ABC’s of Death 2 ½. The hard part was only selecting 26, as the competition provided so many outstanding entries. We couldn’t be happier with the final lineup. There’s enough horror, humor, weirdness, and, frankly, truly fucked up material to give even the most jaded fan a wake-up call from Hell.”

The ABCs of Death 2 ½ will be available on Vimeo from 2nd August. Before then, check out this trailer (below) and poster (above) for the M-centric Marathon of the Macabre.