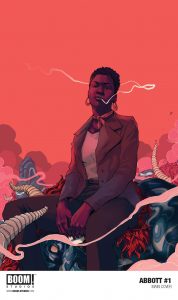 Blaxploitation has a long and sordid history in the annuals of film history and has genre-ranged from crime/action to comedy, horror, and even musicals. Though the controversial sub-genre had risen and fallen in the early seventies, it’s hard to deny the impact that it’s had on its portrayal of inner-city life and has even been credited for re-thinking race relations during the era. Following in its foot-steps, BOOM! Studio’s newest horror work Abbott takes the hard-biting realism of Blaxploitation crime, mixes it with gender and race issues of the 60’s and 70’s, and rounds it out with a hefty dose of black magic and murder. Set in 1970’s Detroit, this comic addresses issues that seem uncomfortably prevalent even in this day while cleverly taking a look at a problem that affect all races and sexes: creepy occult dudes summoning demons. No matter who you are, there is no escaping the Devil.

Abbott, named after out lead Elena Abbott, follows the ins-and-outs of being a young, black, female reporter during a very tremulous time in Detroit’s history. As she is sent to report about a slain police horse, we quickly learn that she’s not exactly the most popular person on the crime beat. Her previous article on police brutality had landed her in the hot seat with Detroit’s finest who, upon her arrival, begin to vehemently shut their mouths lest she publishes what they say. But it’s not just the accusations of “Black Panther retaliation” that had caught her interest, but the dead horse itself. She knows that it’s not the work of any human, but something much more sinister, something she had seen only once when she was much younger. When a junkie’s body is also discovered mutilated and headless, it only helps firm her suspicions: something wicked this way comes.

What makes Abbott really stand out is not so much the attempt at mixing two genres that usually wouldn’t get along, but the fact that the writer, Saladin Ahmed, managed to do it without turning the whole thing into a wacky mess. He succeeds at updating a genre that, frankly, would seem out of place in the far-off future of 2018 and does it in such a way that seems truer to what was actually happening in the 1970’s. Putting it under the Blaxploitation banner doesn’t really do it justice since Ahmed is clever enough to avoid the stereotypes of his predecessors, but given the era that it was set in, it’s a quick, lazy way to label it. Also, his portrayal of Elena is wonderful, creating a strong woman who is not afraid of the word no and fights for what she believes is right, something that she gets heftily praised on. 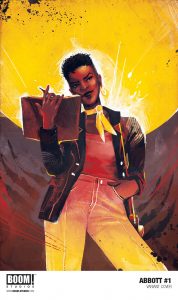 That being said, neither the cult horror nor the Blaxploitation angle are especially unique and tend to rely heavily on each other for the comic to be an interesting read. The lead characters constant fight for recognition, while an important story, is a story told many times before; same for the supernatural cult-killings. On their own, the stories wouldn’t be very interesting and even seem to be at odds with each other as they fight for the spotlight. It’s hard to tell what the reader is supposed to be invested in, the horror of the murders or Elena’s fight for equality? Perhaps the second issue will smooth over these bumps once the story gets passed the introduction phase, but for now, it’s a bit of a confusing read.

The art, on the other hand, is pretty fun and while not especially unique, it’s clean and well fitted for the work. Artist Sami Kivela plays around with interesting angles and is well timed with his reveals, creating for a free-flowing, easy comic read. All-in-all, Abbott is a stimulating read and despite a rough-start, the ending promises a pretty great payoff for those who grab the second issue.