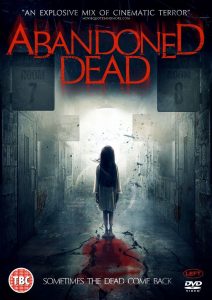 Suspense-Thriller-Horror hybrid ‘Abandoned Dead,’ new from Wild Eye Releasing, delivers decent scares while seeming somewhat familiar: a security guard [Rachel Burke, played by the ever-talented scream-queen Sarah Nicklin] finds herself trapped in a rundown medical clinic somewhere deep in Los Angeles and soon discovers she is not alone. As paranormal disturbances mount, so do her fears and and paranoia and a rising sense of dread.

While similar to the low-budget ‘Late Shift,’ with quite a few identical elements, story diverts from the familiar and delves into dream territory where the viewer finds it difficult to distinguish between Rachel’s paranoid delusions and actual reality. Further complicating the mix is the introduction of a somnambulist police detective who attempts to piece together clues that become challenging to follow.

This micro budgeted offering is uneven at times, given the nature and limitations of such films, but does a decent job of building suspense while still delivering an homage to the low budget slasher films of the 1980’s. There are plenty of John Carpenter-style shots and scenes throughout, spookily lit by cinematographer Robert Adams, who also contributes a chilling score.

Mark W. Curran, who has taken on multiple tasks of Writing/Producing and Directing, shows promise in his first feature film outing, though there are times when his ambitions seem bigger than his budget allow. Special effects are limited but effective, bloodshed kept at a minimal level. Though the pedestrian acting is not worthy of academy award nomination, it is more than adequate in getting across the feeling of danger and impending peril of the character’s ever-deepening plight.

Acting deserving special mention are Sarah Nicklin’s performance, which is is outstanding, and for horror veteran Judith O’Dea [Night of the Living Dead] who turns in a wonderful cameo role as a psychiatrist, while newcomer Chris Parker brings a howl to the proceedings as a creepy caretaker.

A note for those story lovers who don’t like guesswork and ambiguous endings, this one’s not for you. A puzzle is left for the viewer to unravel and may require several viewings to understand completely what is going on. At its heart, this movie is a throwback to the films I used to watch on VCR when Freddy and Jason still roamed the earth and ‘Halloween’ was just a rental
store away. 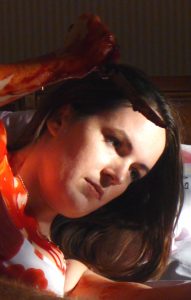 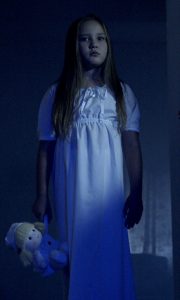 Though not on the level of a studio-backed picture or Jason Blum instalment, ‘Abandoned Dead’ does some heavy lifting for its diminutive size and delivers enough punch to be worthy of your time.