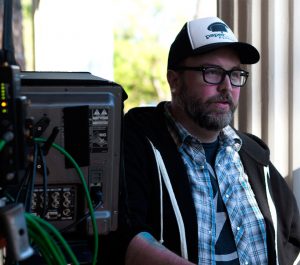 A former Full Sail graduate, filmmaker Aaron B. Koontz has amassed well over a decade of experience in the film industry with credits including work on large-scale studio features such as 2 Fast 2 Furious and The Punisher. More recently he served as exec-producer of 2014’s breakout horror hit Starry Eyes but now it’s his turn behind the camera as his directorial debut, Camera Obscura is all set to hit the big scren.

Co-written by Koontz and Cameron Burns, Camera Obscura stars Christopher Denham as a veteran war photographer with PTSD who starts seeing imminent deaths in his developed photos which has him questioning his already fragile sanity and putting the lives of those he loves in deadly danger.

SCREAM: What resonated with me the most was just how creatively and authentically you managed to translate PTSD onto the screen.

Aaron B. Koontz: A lot of the credit in that respect I think has to go to Chris Denham. I just felt he was able to emote all of those emotions just with his eyes. His eyes would just seem to say certain things without any words actually coming out of his mouth. We tried to do a number of things. For instance, during research there were certain movements that we found a lot of people with various mental illnesses would perform such as putting their hands over their faces and things like that and we implemented those as much as we could. As far of the psyche and all of that, we did a lot of research into PTSD and what this really means. Also, towards the end of the film for example, there’s a scene were we see Chris’ character walking down an aisle of blood and we see a kid. That was something that had actually happened. We heard about that from a real photographer who told us that it had happened in Iraq. So, when I heard about walking down this aisle of blood and this kid, it was just heartbreaking so we tried to inject as much of that as we could.

That even happened in terms of the aesthetic of the film. My DP Chris Heinrich, my Production Designer Maxwell Nalevansky and I took real war photography and we created our color palette out of that to create the film. In answer to your question, it all kind of permeates from the process as a whole: from the performance, to the production design, to the shot selection and then the story itself.

SCREAM: You often comment on how important it was for you to create a protagonist who was ultimately an “unreliable narrator.” In reality, the audience can’t help but root for Chris’ character in the sense that he’s looking out for his loved one, but at the same time, he’s the epitome of evil once his designs take him to the most perturbing of places. It must have been an enormous challenge to strike just the right balance between likeability/detestability.

Absolutely. It’s tough, you know? There are those people that tell you you have to make your protagonist a likeable person, but I don’t necessarily agree with that. But at the same time, I’m not saying that I don’t think the Jack character is likable. Trying to find that balance was really tough and so the performance and finding the right person was so crucial for me. I think that Jack has these kind eyes but then he can just turn it and have such a sinister look about him. He has this Jekyll and Hyde approach to him. Even though he was carrying out all of these evil things, he was doing it all for love, right? He had good intentions and that was something that I tried to visually summarise. For example, at the very beginning, the first kill is this man who Jack thinks deserves to die because he’s done some pretty awful things, but then by the last kill, Jack’s just calling a phone number and whoever shows up is going to die. To go through that journey I had to walk with my audience there, and again, without Chris I don’t think it would have been as effective as it turned out. 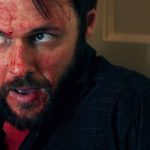 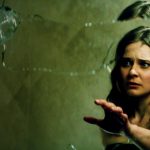 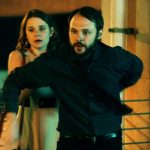 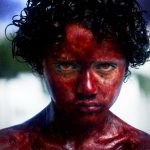 SCREAM: The film was much gorier than I had expected but it never felt gratuitous as I felt it added so much more to the film’s clear designs to really immerse the audience into this guy’s headspace as he loses his grip on reality.

The original script was actually a lot gorier and there were a number of gore scenes that were originally shot but weren’t used. People often talk about the movie you shoot and the movie you ultimately make but I reached a point where I realised that there was too much gore and it was starting to take away the human element and the psychological aspect that I was trying to focus on. I spoke with Chris about this and we decided it would be much more effective if we toned the gore down a bit. I’m glad I did that because I think it works better this way. Even so, I hired the team I think is the best effects team in the world now which is Bob Kurtzman’s team in Ohio and we were prepared to do all kinds of crazy stuff. In the end, it’s still pretty horrific but we managed to keep things a little more grounded and it keeps a much more serious tone for the majority of the film which I think really plays in our favour.

SCREAM: Just to wrap up, are you able to reveal any details on a sci-fi thriller I hear you’ve written and hope to direct in the near future?

Sure. As Camera Obscura took a while to get made, I started writing a number of scripts and my co-writer Cameron Burns and I have spent a lot of time writing a few features. But the big one for us is the science-fiction feature you mentioned which is called Dream Machine and we’re moving forward on that and hopefully we’ll be able to shoot that at the end of this year or early 2018.

Camera Obscura hits theatres from June 9 before releasing VOD and Digital HD on June 13. In the meanwhile, we’ll leave you with the more than tempting trailer…