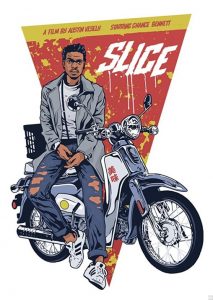 A24 has a released a teaser trailer for its upcoming horror-comedy feature Slice, which follows the events that occur after a pizza delivery guy is murdered.

Producer Brett Hays has described the film at poking fun at the horror genre, describing the film’s location as:

“It’s a city where ghosts and humans come together; there’s a ghost town and a regular town.“It just kind pokes fun and has fun with those genres.”

As A24 has been behind the distribution of some of the greatest genre films of the past few years – including Green Room, The Witch and Under the Skin – we can’t help but be immediately intrigued by Slice.

You can check out the teaser below. It doesn’t offer much in terms of plot, but it does use a creative and fun approach as it teases this next feature. Slice has no release date yet, but hopefully the film will land in early 2018.