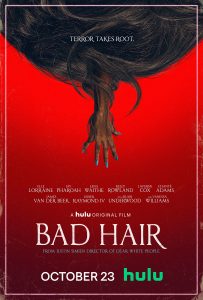 From writer-director Justin Simien (Dear White People), Bad Hair debuts on Hulu later this month as part of the streaming platform’s “Huluween” celebrations—and the new trailer will tangle you up!

Set in 1989, Bad Hair is a horror satire that follows Anna, an ambitious young woman who gets a weave in order to succeed in the image-obsessed world of music television. However, her flourishing career comes at a great cost when she realizes that her new hair may have a mind of its own…

Hulu will start having a Bad Hair day on October 23rd. Grab a comb and check out the trailer below!