A WALK AMONGST THE TOMBS: FILM REVIEW 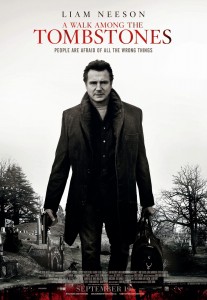 A WALK AMONGST THE TOMBS

With his soft yet menacing Irish brogue the man spoke into the phone, ‘I don’t know who you are. I don’t know what you want… but what I have are a particular set of skills, skills that make me a nightmare for people like you. I will look for you, I will find you and I will kill you.’  At this point I put my phone down and decided not to ring Liam Neeson at home anymore. But it’s this speech from ‘Taken’ which reinvigorated his career in 2008.

‘A Walk Amongst the Tombs’ however is more of a conventional thriller based on Lawrence Block’s  series of  novels based around his Matthew Scudder ex alcoholic cop character which has been kicking around Hollywood for years before being adapted by top Hollywood scribe Scott Frank who also wrote the terrific screen adaptations of Elmore Leonard’s  ‘Get Shorty’ & ‘Out of Sight’.

Opening with the seemingly obligatory cop-in-action-with-tragic-results scene before Scudder leaves the police force to become an unlicensed investigator where he is offered a case by a drug trafficker to locate the people who kidnapped and killed his wife despite the ransom had been paid. Initially turning it down he accepts the job only to find an increasingly unsavoury and frankly exploitative plot involving a pair of sick sadists. As ever with this type of thriller the plot is both bloody and downbeat with Neeson’s recovering alcoholic ex cop determined to redeem himself for past transgressions that drive his character, though it seems that most of his allies are criminals who help him are also attempting some sort of
personal redemption despite their own circumstances.

But it’s these other characters who are make the plot less than credible none more so than the streetwise black kid who lives on the street and who Scudder bizarrely uses as an associate employee. With the film being set in 1999 and on the cusp of Y2K fear this street kid seems to have adopted the lingo of the jive talking passengers from ‘Airplane’ to such a degree that Neeson asks, ‘Can you talk English?’ This is only Scott Franks’  2nd directorial film since 2007’s crime drama ‘The Lookout’ but he knows how to keep the plot moving and ties it all up with a climactic scene cross cut with the 12 step programme set by Alcoholics Anonymous.

With some grimly chilling moments this is ultimately yet another cop with inner demons movie and does enough to pass the time until Neeson returns next year in ‘Taken 3’.